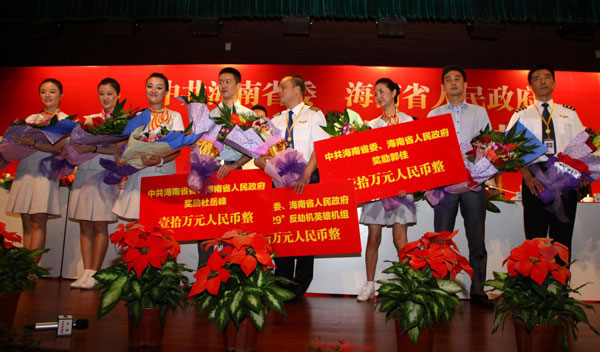 The crew of flight GS7554, carried by Tianjin Airlines, were rewarded by parent company Hainan Airlines (HNA) and the provincial government of Hainan at a ceremony held in the southernmost island province Monday.

The hijacking attempt was made just 10 minutes after the plane took off on June 29 from Hotan in southern Xinjiang for the regional capital of Urumqi. Six hijackers, wielding aluminum pipes, tried to storm the cockpit but were beaten back by both crew and passengers.

At least 10 people, including four crew members, were injured in the attack.

The provincial government gave each of the crew members 500,000 yuan, with two crew members receiving an extra 100,000 apiece for actions that were "especially heroic."

The Xinjiang Uygur autonomous regional government previously gave the crew members 500,000 yuan, as well as 100,000 each for 10 passengers and crew members.

HNA announced Monday evening that it will grant the title of "HNA honorary passenger" to 22 passengers who helped subdue the hijackers.

The 22 people will receive free lifetime airfare from HNA, according to a statement from the airline.