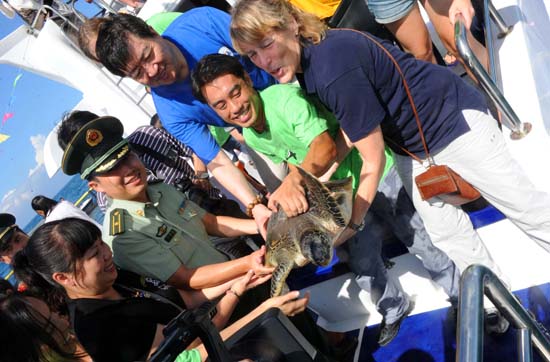 With blue skies above and turquoise waters below, approximately 50 people, including government officials, students, volunteers, local fishermen, and community members, boarded a boat taken into Lingshui Bay where the animals were set free into their ocean home.

Coincidentally, the event was held on America’s Independence Day.

"Sea turtle conservation does not only involve sea turtles. When we protect charismatic species such as whale sharks, those efforts spill over and protect sea turtles as well,” he said. “These two animals share the ocean, and we must learn to share the ocean with them.”

He added that currently, sea turtles and sharks are endangered due entirely to human-related causes; therefore, “protecting them is humankind’s responsibility.”

The whale shark and one of the sea turtles were outfitted with satellite transmitter tags that will communicate information such as their location, swimming speed and depth, and surrounding water temperatures.

Despite being the largest fish in the ocean, very little is known about the life histories of Whale sharks, particularly in the South China Sea.

Suzanne Gendron, director of Ocean Park, said, “Recently, a Whale shark was sighted in Hong Kong waters. We believe it is a member of a larger whale shark family in the Pacific, and with events like today, we will be that much closer to finding the truth.”

The satellite tag will help biologists learn more about their extremely long migration paths, areas in which they feed, and possibly even where they breed, so that conservation efforts are focused in these places.

It is believed that adults can reach up to 20 meters (65 feet) in length and weigh 30 tons. Whale sharks are listed as vulnerable by the International Union for the Conservation of Nature (IUCN).

They are often victims of fisheries by-catch, accidentally caught by fishing boats, or hunted and killed for the value of their large fins to be used in shark fin soup. A traditional Chinese dish, the demand for shark fin soup has increased as China’s economy grows.

In recent years ‘shark-finning’ has become controversial due to the inhumane nature of the catch; caught sharks have their fins sliced off and are thrown back overboard to eventually drown, unable to swim without their fins.

It is estimated that approximately 100 million sharks are killed each year for the industry.

Both had been in residence at Sea Turtles 911’s floating sea turtle hospital for approximately 10 months after being rescued from the illegal sea turtle trade. They were admitted on the same day, both suffering from extreme nutritional deficiencies and weighing a bare-bones 16 kg (35 lbs) each, making their successful dual release all the more special.

Green sea turtles are hunted and raised by poachers for their meat, which is considered a delicacy in China.

Sea Turtles 911 is a Hawaiian non-profit organization focused on ending the illegal sea turtle trade, which thrives on the demand for sea turtle meat and items made from sea turtle shell, particularly from the critically endangered Hawksbill sea turtle (Eretmochelys imbricata).

The organization also works closely with local fishermen to encourage the conservation and release of whale sharks caught as by-catch by Chinese fishing boats.

SOURCE: hawaii247.com
Editorial Message
This site contains materials from other clearly stated media sources for the purpose of discussion stimulation and content enrichment among our members only.
whatsonsanya.com does not necessarily endorse their views or the accuracy of their content. For copyright infringement issues please contact editor@whatsonsanya.com

Next news: Aquaculture research center to be built in Sansha city in South China Sea