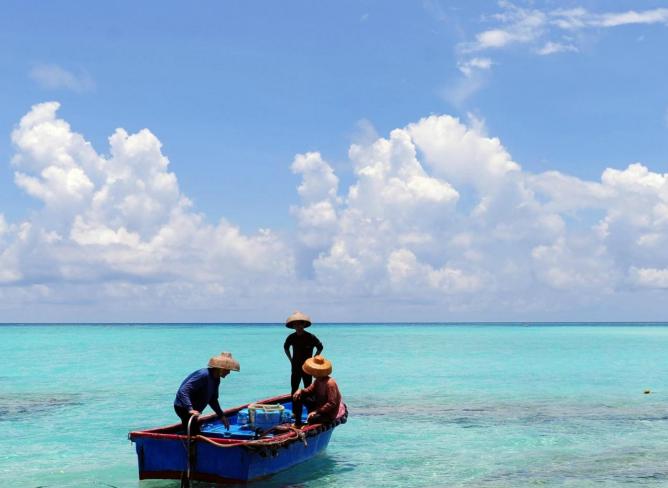 Three Chinese fishermen from Zhaoshu Island, part of China’s Xisha Islands set off for a day’s catch in the South China Sea on May 8, 2012.
Located 330 kilometers southeast of South China’s Hainan province, the Xisha Islands are one of four big island groups in the South China Sea, together with the Dongsha, Nansha and Zhongsha islands. Situated south of the Tropic of Cancer with abundant rainfall, a group of Chinese reporters took a tour of the Xisha Islands and recorded some amazing images of these islands.[Photo/Xinhua]
Residents of the Xisha Islands in the newly established Sansha city will be able to watch 48 satellite TV channels for free by the end of August, Hinews.com, a news portal run by Hainan Daily Press Group, reported on Tuesday.

Zhang Yuqi, section chief of the broadcasting and television technology administration of the Department of Culture, Radio, Television, Publication and Sports of Hainan province, said that they have set a TV and radio station on Yong Xing Island of the Xisha Islands, and provided 1,000 radios to residents on the Xisha Islands.

According to the report, the department is working on a service that will enable fishermen to watch TV while working at sea.