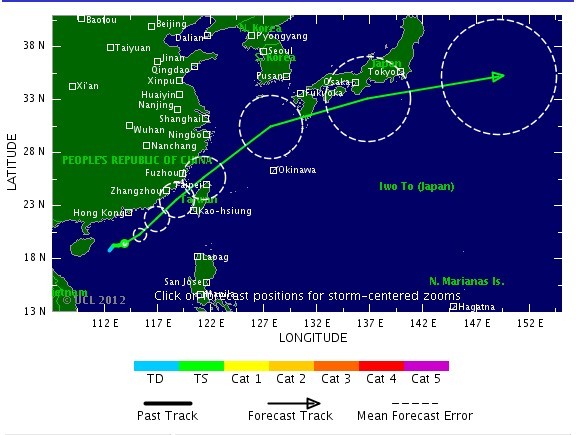 Talim, which was upgraded from a tropical depression Sunday night, was located 230 kilometers from the city of Wenchang in China’s southernmost Hainan Province at 6 pm yesterday, according to the National Metrological Center (NMC).

The storm packed winds of 82.8 kilometers per hour and is expected make the Taiwan Strait tonight.

The storm’s frontline brought heavy rains to many parts of Fujian, which is located across the strait from Taiwan.

The local flood control center in Fujian said the storm had dumped 50 to 100 millimeters of rain on 10 counties and 24 counties were drenched with between 25 and 50 millimeters.

The weather bureau has forecast moderate to heavy rain in many of the province’s cities. In the worst-hit areas, precipitation is expected to exceed 100 millimeters in the coming 24 hours.

Hainan Province is also on guard against the tropical storm. The weather bureau issued a heavy rain and high wind warning beginning yesterday and ending tomorrow.

The headquarters also sent two disaster relief teams to Guangdong and Fujian provinces after dispatching one to Hainan Sunday.

Next news: Allan Zeman to bring Lan Kwai Fong to Haikou from HK