Yeovil College partners with Hainan School on A Level Academy 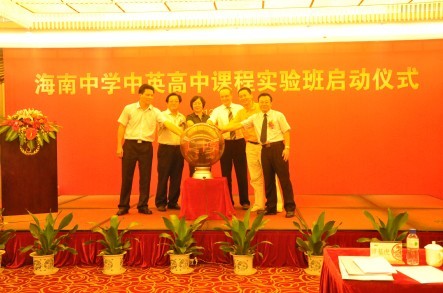 The scheme means that Yeovil College will help to deliver AS and A Levels to Chinese students in subjects including Maths, Physics, Chemistry and Mandarin from this September. The College will also support the students with their English Language studies.

Initially, the College will support 60 students studying for their AS Levels in China with specially recruited teaching staff. Yeovil College lecturers will also complete placements at Hainan School to teach the students and Hainan staff will also visit the College.

Once they have completed their first year, the students will travel to Yeovil to continue their studies at the new £1.1 million A Level Academy, due to open later this year.

Yeovil College has a growing international reputation for A Levels and has already begun a similar scheme with 50 students at two schools in Shanghai, Cao Yang Senior High School and Fengxian High School, which Mr Hampton has already visited. Senior staff from the Shanghai schools also came to Yeovil College early in 2012.

The programme is developing rapidly and a further 120 students are expected to begin A Level studies under the scheme later this year.

Mr Hampton said: "Mr Ma, the Principal of Hainan School, was particularly impressed with the excellent results achieved by our students and Yeovil College’s high level of investment in the new A Level Academy.

"A Level qualifications are held in particularly high esteem by parents and teachers in China, a country which fosters a strong culture of self-motivation, aspiration and high personal achievement.

"Our motivation in creating the A Level Academy is to encourage an even greater atmosphere of academic ambition among local young people. As such, there is a clear synergy between Yeovil College’s aims and the development of links with schools such as Hainan.

"These partnerships will not only help international students gain a highly prized education, but also promote cultural diversity and exchange within Yeovil, which is already gaining a strong reputation in China as a friendly, dynamic and safe community to join."

SOURCE: yeovilpeople.co.uk
Editorial Message
This site contains materials from other clearly stated media sources for the purpose of discussion stimulation and content enrichment among our members only.
whatsonsanya.com does not necessarily endorse their views or the accuracy of their content. For copyright infringement issues please contact editor@whatsonsanya.com

Next news: Ken Chu’s Haikou ‘golf mission possible’, he tells us how