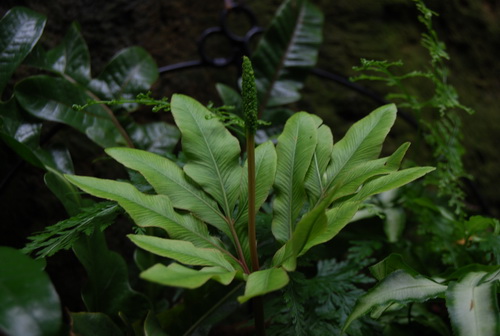 In the rare fern pavilion of the Shanghai Chenshan Botanical Garden, an unusual plant stands out from the crowd. It is called the Helminthostachys zeylanica, commonly known as Kamraj and tunjuk-langit. The genus of the Helminthostachys is monotypic and, just like the other member of its family, it has clusters of sporangia on the stems of its fertile and spike-like fronds.

The Helminthostachys zeylanica’s scapes normally range from 30 – 55 cms and the roots of this plant are a popular medicine in China, where they are known as "Di Wu Gong" (meaning plant centipede).

The plant is harvested during the wet season in July or August in Southern China’s Guangdong province, Taiwan province, Hainan province and Yunnan province. It is also found in the subtropics of other countries in Asia and Australia.

Although its spadix looks like a flower, the plant is actually a flowerless and seedless vascular plant. The frond spike arises from the base of the leaves with its own stipe. Below the spike is a sterile leafy segment (the trophophore). Both it and the sporophore arise from a common petiole.

Next news: Hainan Week at 2012 Yeosu World Expo to kick off on July 15