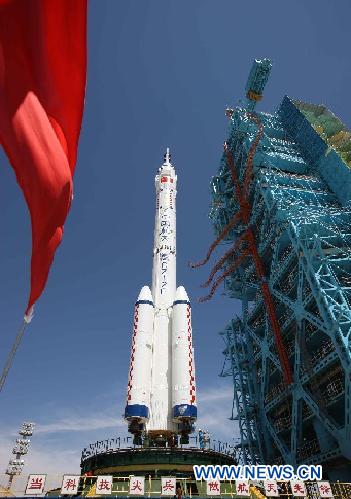 The mission will feature the country’s first attempt at manual space docking with the orbiting Tiangong-1 lab module, as well as tasks to be completed aboard the Tiangong-1 by astronauts from the Shenzhou-9, space experts said at the Jiuquan Satellite Launch Center in northwest China’s Gobi desert.

"The launch of the Shenzhou-9 is a highly influential event that marks an important milestone for the development of China’s space technology," Cui Jijun, director of the Jiuquan Satellite Launch Center, said on Wednesday.

This year marks the 20th anniversary of the creation of China’s manned space program, which was officially initiated on Sept. 21, 1992. The launch of the Shenzhou-9 spacecraft marks the program’s 10th launch and the country’s fourth manned spaceflight.

China aims to build a space station around 2020 based on the space rendezvous and docking technology that is currently being tested. Several components will be sent into space separately before being assembled into a space station through a variety of docking procedures.

"In the Russian and USA space programs, the most serious docking problems have been caused by automatic docking systems, more so than by manual docking," said Pat Norris, chairman of the Royal Aeronautical Society Space Group.

"China has taken the prudent course of verifying new space technology in robotic flights before applying it to human space missions," he said, referring to last November’s unmanned Shenzhou-8 mission to test docking technology, as well as four unmanned missions that took place before the launch of the Shenzhou-5, which took astronaut Yang Liwei into space in 2003 and orbited Earth 14 times.

"China is only the third nation to launch humans into space, which is a very impressive achievement," said Norris, who is also a member of the Executive Committee of the UK Parliamentary Space Committee.

FULL PREPARATIONS
The Command Hall of the Jiuquan Satellite Launch Center is in "ready to launch" status, according to launch center commander Wang Jun, who will be responsible for turning the ignition key during the actual launch.

A full-system drill was held on Tuesday, with all systems relevant to the mission found to be in full operating condition, Cui said.

He added that a sound emergency plan is in place and comprehensive escape drills have been conducted to ensure the safety of the three astronauts aboard.

The target module Tiangong-1 was brought down to docking orbit in early June and is ready for docking attempts by the Shenzhou-9 and Shenzhou-10 spacecraft, according to a spokesperson from China’s manned space program.

The three astronauts have been "strictly quarantined" so as to guarantee their physical and psychological condition, according to Lu Jinrong, chief engineer at the Jiuquan center.

"We cannot see them or get in touch with them. All we can do is provide support for their life and work," Lu said.

Although the construction of another launch center in southern China’s island province of Hainan is well under way, the Jiuquan center will continue to be used to send manned spacecraft into space, while heavy components to be used to build the space station will be launched at the Hainan center, Lu said, adding that the Jiuquan center will "constantly adapt to new missions."

HIGH TEMPS POSE THREAT
"This launch marks the first time for a Chinese spacecraft to be launched during the hot summer weather," Cui said.

The previous nine launches — from the launch of the Shenzhou-1 to the Tiangong-1 — took place in spring, autumn or winter, he said.

"Summer is a good choice for the launch time," he said, as thunderstorms seldom occur near Jiuquan during the summer. Spring and winter bring sandstorms and extremely low temperatures to the area, respectively.

Cui cited the launch of the Shenzhou-4 spacecraft on Dec. 30, 2002, saying that cotton quilts were used to keep the rocket warm before launch, as temperatures fell to negative 29 degrees Celsius that evening.

The majority of China’s spacecraft launch missions have taken place in autumn. However, after taking the Shenzhou-10 mission scheduled for later this year into account, June emerged as a suitable option, according to the director.

The upcoming launch may face another challenge in the form of strong wind and sand that blew through the area on Wednesday. The winds are predicted to last until Thursday, said Zhang Daochang, a deputy commander at the center.

According to an in-depth weather forecast and analysis of June’s weather over the past two decades, Friday and Saturday will be "relatively stable," Zhang said.

"We’ve sent balloons into the sky and used radar to track the wind speed," he said.