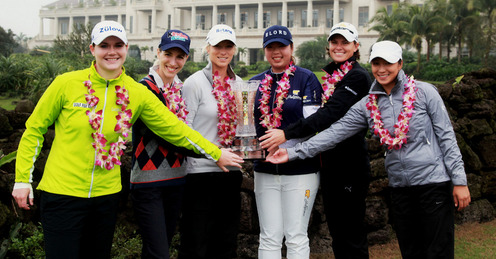 Australian Frances Bondad, who won the 2011 Sanya Ladies Open in Hainan Province in October, said that the resort, which boasts 10 courses set amid a volcanic tropical landscape, was ‘a golfer’s paradise’ while Germany’s Caroline Masson said the venue was ‘pretty awesome’.

England’s Melissa Reid gave the resort her vote of confidence, describing it as, ‘massive’ while Italian Diana Luna agreed with her description: ‘huge and very nice!’

South African Lee-Anne Pace, who won twice in China during a phenomenal 2010 season, when she earned five titles around the world, was also full of praise. ‘It’s absolutely amazing. From the first time I stepped into the hotel room to the practise tee, everything is absolutely fantastic,’ she said. ‘I can definitely see this becoming a key event on the women’s tour calendar. I like playing in China, I like coming to China and like the people so feel very much at home here.’

Chinese number one Shanshan Feng, ranked 12th in the world, played at the venue two years ago in the Mission Hills Star Trophy 2010 when she was grouped with the American actor Christian Slater and she commented: "It’s fantastic."

With two top ten finishes from two starts on the LPGA Tour this season, having tied for fifth at the Honda Thailand and shared second at last week’s HSBC Women’s Championship in Singapore, she is an obvious favourite and looking forward to the team aspect of the event.

The tournament gets under way from Friday with a ‘three-in-one’ concept. Individual professional and amateur stroke play events will take place over 54 holes at the same time as a team stroke play competition.

There are 19 teams, including two pairs from China and Feng is teamed with Liying Ye, runner-up to Annika Sorenstam at the 2008 Suzhou Taihu Ladies Open.

Feng said: ‘I like it very much because we always play in individual tournaments but playing as a team for two people; I think it’s really interesting to me and really challenging, so I like it.’

Feng plays on the American, Japanese and China LPGA Tours, but rents a home in Orlando, Florida.

With all of her global experience, she considered the Vintage Course a world-class test of skill for golfers at the elite level. ‘I think here we are playing long and the greens are really tough. I think maybe this is harder,’ Feng said.

On her chances of winning the team title, she said: ‘I’m not going to give myself too much pressure. I will just try my best and maybe say top three.’

On her goals for the individual professional tournament, she added: That’s a hard one to say: top three too.’

Located in Haikou, which is Hainan Island’s capital city, all 10 golf courses at Mission Hills Haikou are strewn with black lava rocks. Standing on the volcanic golf courses, you can view a horizon of lychee trees and serpentine lava walls.

The par-72 (38-34) Vintage Course, designed by Brian Curley, has been set up at 6460 yards for the tournament and is playing long on account of the recent rainfall.

In addition to the leading professional competitors, there are also eight amateurs in the field of 108 competitors including world number one Lydia Ko, who will play for a separate amateur title.

New Zealander Ko made headlines last month when she became one of the youngest ever players to win a professional tournament at the New South Wales Open in Australia aged 14.

After touching the impressive crystal trophy during a photo-shoot on Wednesday, all of the star players will be keen to get their hands on the prize again.

SOURCE: www.golf365.com
Editorial Message
This site contains materials from other clearly stated media sources for the purpose of discussion stimulation and content enrichment among our members only.
whatsonsanya.com does not necessarily endorse their views or the accuracy of their content. For copyright infringement issues please contact editor@whatsonsanya.com