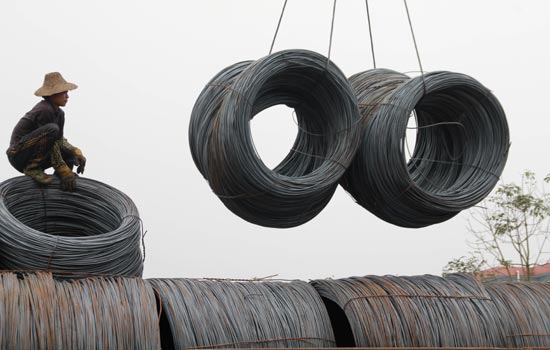 Steel being hoisted at a market in Haikou, Hainan province. [Photo/China Daily]
The Chinese steel industry is gearing up for an expected surge in demand in the wake of a speedup in the approval of major infrastructure and industrial projects, experts said.

As the State Council announced a series of policies to stimulate the economy by accelerating the approval of many important projects, including railway, energy, and infrastructure construction in rural region and western China, steel industry analysts said the pipeline of new work will increase demand for steel in the long term.

They expected steel prices to rebound as early as the end of this month as a result.

Ma estimated the steel market will become particularly strong in the third quarter of this year. The resultant demand for new heavy construction equipment, which requires mainly high-end and special steel product, will also give the overall sector a significant boost.

"The construction steel market will gain the biggest benefits from the new policies, and the demand for equipment manufacturing steel will increase too," Ma said.

Han Weidong, a senior steel industry expert with Lange, added that given the approval of major infrastructure projects is a relatively long process, steel prices are likely to stop falling, and may even rise because of the "new projects’ stimulation".

According to the latest data from the China Steel and Iron Association, the steel inventory in 26 major markets in the country reached 15.61 million tons by June 1, an indication, it said, of ongoing oversupply in the market.

According to data from the customs office, China exported 4.67 million tons of steel in April, 361,000 tons less than the previous month, a 7.2 percent drop month-by-month.

Currently, many provinces are focusing on the approval of both new and suspended projects.

According to reports from Lange, up to 80 percent of suspended railway projects have been restarted, while urban rail projects are becoming a new investment point as the enthusiasm for high-speed railway cools down.

Previous news: Billions to be raised in IPOs to build nuclear power project in Hainan

Next news: Telling the story of the Yi People, dance drama presented in Haikou