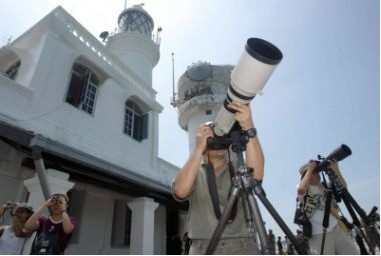 Nature lovers taking a good look at the raptors at light house Tanjung Tuan.
Growing up in the ‘army town’ of Port Dickson holds special memories for a Hainanese daughter.

MY dad is a second generation Hainanese who followed in the footsteps of his relatives and friends, who’d made their fortune in Malaya. He was just a teenager when he sailed in a Chinese junk from Hainan Island to the Malay Straits Settlements in the 1920s, and arrived in Port Dickson (PD), the "army town”.

Though illiterate, Dad’s culinary skills got him a job as a cook at an army camp. Back then, most of the Chinese in PD were from the Hailam-speaking community. The Hailam Chinese migrated to Malaya quite late, compared to the other dialect speakers, and were engaged in their traditional occupations, such as restaurateurs, coffee shop owners and café operators. Some engaged in pig farming.

Dad managed to save some money and opened his own coffee shop at KM5, Jalan Pantai. His business licence was approved by the District Office. Back then, charcoal from mangrove and rubber wood was widely used for cooking and baking.

Dad served both Hainanese Chinese and Western fare, and his business flourished. Butter and kaya toast, hand-made French loaf, and a fragrant coffee were very popular among his customers, who were mainly locals and British soldiers who served in PD during the Communist insurgency. The soldiers were stationed in a nearby army camp.

There was an aquarium with a big eeltail catfish in the coffee shop. An aquarium is a must-have in a Hainanese household because the water element and movement of the fishes are believed to promote positive energy and enhance its feng shui.

Food business in those days was based on trust and the accounts were recorded in a ledger. Competition was stiff and shops relied not only on tasty food but also the impeccable reputation of their owners.

Dad got lucky and made a fortune. His sense of ka-ki nang (Hailam pronunciation), literally “own people”, was very strong. He would send remittances home to China to his family, relatives and close friends. He also recruited one of his relatives in Singapore to help out in his shop and paid him a monthly salary of $1,000, a hefty sum at that time.

Over the years, Dad diversified his business and opened a sundry shop selling army goods like boots, shoe polish, belt buckles, tents, raincoats and waxed fire starters. He owned a car when everyone else rode motorbikes or bicycles.

When the Japanese invaded Malaya, Dad kept his prized possession – a vintage car – hidden under a thick bush. He and mum then went into hiding deep in the jungle. Scarcity of food during the Japanese Occupation led to the mass consumption of tapioca shoots, sweet potatoes, boiled jackfruit seeds and even curried python meat.

Tapioca trees were planted extensively as it is the fastest growing crop. When the Japanese surrendered in 1945, Dad received news that his vintage car had been found in Singapore. However, he never got around to claiming it; neither did he ever return to China.

Dad passed away in the 1960s. Although his life seemed to revolve around his business, he was a good father. I remember him being an avid fishermen and bird-watcher – he knew all the vantage points for bird-watching.

He loved camping and cooking in the outdoors, especially roasted lamb leg. He had a fierce Doberman pinscher named Jack that could perform a trick or two when commanded. Jack was an abandoned circus dog found at the army camp.

Mum was responsible for the upbringing of her three children. Sons were presented with a pendant with a black dog motif, a common practice among the Hainanese. A black dog denotes fierceness and the wearer is believed to gain strength and not be afraid of spirits or ghosts.

Mum was an equally good cook. We grew up healthy and strong with her special breakfast of oats mixed with raw eggs. Mum could cook a mean curry dish. Her specialties included Hainanese chicken rice, braised mutton and mushroom (a Hainanese dish) and fish head curry. From her, I learned the secret of making a fine cup of coffee. The coffee bean was roasted with a little butter to enhance its flavour.

As Dad owned a coffee shop, we enjoyed many quality, imported canned foods. Among the big brand names then were Cadbury, Golden Churn, Lipton, Carnation and F&N. We also used "branded” soaps, powder and hair cream, such as Yardley’s, Imperial Leather and Camay.

I have many fond memories of growing up in PD, where the beach stretched many kilometres. PD’s waters were known for stringrays or monster fish.

Residents of the town believed the waters were inhabited by a mystical and helpful guardian, the "Datuk” – said to be the spirit of a powerful religious leader – who could foretell events. His shrine was said to be located somewhere near the Tanjung Tuan (Cape Rachado) lighthouse.

Worshippers of all races flocked to the shrine every 15th day of the lunar month and on weekends. Halal food was prepared and offered to the Datuk. It was said that mishaps such as boating accidents would occur should pork-based food be brought across PD waters.

Sago palm and noni trees grew in abundance along the sandy shores of PD, but not many residents knew about the latter’s medicinal properties. A noni concoction is good for easing pain caused by arthritis, although it is pretty bitter to consume. The green noni fruits are sliced, boiled with water and then dried under the sun. They must be properly dried or they will turn mouldy. It’s best to keep them in air-tight containers.

Among the highlights of my young life was being chauffeured around town in a Rolls Royce that belonged to an old acquaintance of Dad, and gazing at eagles, hawks, buzzards and other raptors (migratory birds of prey) during their seasonal appearance at PD.

My brothers and I went beach combing, biking, bird-watching, recreational fishing during high tide, and camping under the stars. We were an adventurous bunch and knew almost every inch of the beach. We even went up to the Cape Rachado lighthouse, built by the Portuguese many years ago.

I remember we also witnessed an Indian cremation ceremony using rubber wood, at KM4 Jalan Pantai. The ashes of the deceased were then scattered into the sea as part of the final rites.

Mum used to bring us to the old shrines, which were revered and well-maintained by the locals. One of them was the Monkey God (a “fierce” Indian God) shrine, which was surrounded by numerous monkeys. The shrine housed a statue of a monkey adorned with a gold chain.

The Monkey God is said to be very helpful when life is hard; one can request “lucky” numbers from him. In return, one presents the shrine offerings of food or money.

PD residents have been offering money at the Monkey God shrine since the 1950s. They believe that the money should not be removed from the built-in, concrete collection box. It is said that a drunkard once stole money from the box and was punished by the Monkey God – he fell from his bicycle and became mute.

I once inserted a one dollar King George V note inside the collection box. The note was still there the last time I visited the shrine.

PD will always have a special place in my heart. I sometimes go back there to attend a relative’s wedding or stay at a chalet owned by a well-off relative. I also spend holidays at a bungalow by the beach.

I am proud of PD’s annual Raptor Watch organised by Malaysian Nature Society. However, I am deeply saddened by the over-fishing, the pollution of the sea, and the 2004 tsunami, which affected the survival of many fishes and led to the floating of sea cucumbers.

I hope there will be more campaigns like Take A Stand In The Sand (launched two years ago) and the Project Revive PD 2010. They can eventually restore PD to its former glory.

Previous news: 27% of vacation house of Chinese millionaires is in Sanya, 11% in Hong Kong

Next news: Sheraton Sanya Resort takes the stress out of wedding reception