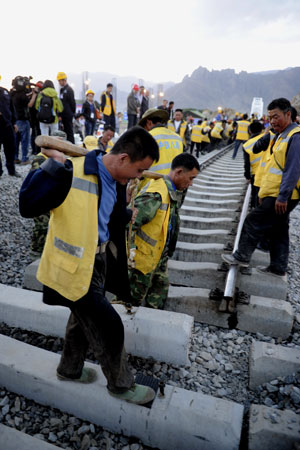 Workers lay tracks on the Lhasa-Xigaze railway in Tibet autonomous region. The central government has approved a batch of new investment projects to bolster the economy. [Photo / Xinhua]
A large package of stimulus policies to simply promote investment projects would be "dangerous" for the weakening Chinese economy as the excess production capacity may result in more serious economic fluctuations, economists warned.

Beijing’s recent new set of demand-boosting policies has raised economists’ worries about a repeat of the side-effects brought by the 4 trillion yuan ($630 billion) stimulus package launched in 2008.

"The key problem for Chinese companies is the overly competitive environment thanks to excess production capacity, rather than a lack of capital," said Pan Jiancheng, deputy director-general of the China Economic Monitoring and Analysis Center of the National Bureau of Statistics.

"A rough expansion of investment may offer temporary relief, but it could result in disasters in the future," Pan said.

The deepening eurozone crisis and worse-than-expected industrial production indicators have lowered many economists’ predictions about the growth rate in the second quarter.

Liu Ligang, head of China economics at Australia and New Zealand Banking Group Ltd, forecast that the manufacturing purchasing managers’ index, an indicator of the operating conditions of the sector, is likely to drop to 51.1 in May from 53.1 in April.

The NBS and China Federation of Logistics and Purchasing will jointly release the latest PMI data on Friday.

"The government needs to accelerate implementing the 2012 fiscal plan, and expand public housing projects, instead of undertaking a new round of fiscal stimulus," Liu said.

In May, there have been indications that the authorities are speeding up the approval process for major projects.

The National Development and Reform Commission has approved new airport projects in provinces including Gansu, Hainan and Heilongjiang.

Meanwhile, the large-scale and long-delayed expansion projects of Wuhan Steel and Baosteel have also reportedly been approved.

The new stimulus policies focus more on encouraging private-sector participation, but many of the measures appear similar to the 2008 package, said Stephen Green, an economist at Standard Chartered Plc.

The property market, the cooling of which was one of the drags on economic growth, has already seen an adjustment in the authorities’ stance with easier financing for large developers and the central bank encouraging first-time buyers.

"Any easing of the property policy may result in a rebound in house prices, which could ruin the impact of previous macro-control efforts," Pan warned.

According to Pan, the slowdown in economic growth doesn’t matter so much.

"What we should really care about is if the slowdown leads to rising unemployment and falling incomes. So far, we haven’t seen these two things happen in China," said Pan.

Michael Heise, chief economist of Allianz Group, said it is not necessary for the Chinese government to launch a large-scale stimulus package, as the economic situation, both domestically and globally, is much more stable than in 2008-09.

"If the government does need to implement some stimulus measures, I would suggest the focus should be on private consumption instead of investment," he said.

"We expect the Chinese economy to start picking up speed again in the course of the current quarter. The easing of monetary policy initiated in December 2011 is now starting to bear fruit, with lending picking up since the beginning of the year," Heise added.

"All in all, we expect to see China’s real economic growth of 8.5 percent this year and 8.3 percent next year," he said.