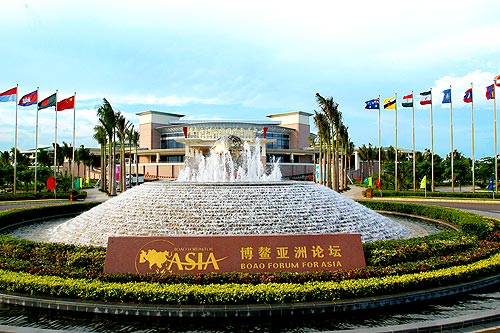 PRIME Minister Yousuf Raza Gilani’s plea for Asian unity, which he made at the annual conference of the Boao Forum for Asia in China on April 2, has gone almost unnoticed. But it merits serious reflection.
He said: “If we do not establish a regional harmony based on trade, investment and economic growth, we fear we will remain hostage to the past.” The 21st century, he added, was the "Asian century” and Asia’s role in the global economic order has changed rapidly. He cited some recent steps such as tariff liberalisation with China, a new transit trade agreement with Afghanistan, steps towards most-favoured nation status for India, and regional projects in gas pipelines and communication as factors that will alter the regional situation radically.

This will be a sign that the countries affected have fully realised the need for “regional harmony”, as the prime minister put it. In this, Asia has sadly been lagging behind the other continents. Europe has its Council of Europe, the Americas have their Organisation of American States and Africa, a latecomer, established its African Union (established as the Organisation of African Unity). African states are no more united than Asian states. But not only did they set up a regional organisation, despite the hiccups they saw to it that it worked. Why are Asians so backward, then?

In January 1949 the prime minister of India, Jawaharlal Nehru, convened an 18-nation Conference on Indonesia at New Delhi. The participants included Afghanistan, Australia, Burma, Ceylon, Egypt, Ethiopia, India, Iran, Lebanon, Pakistan, the Philippines and Saudi Arabia. Among the tasks set before the conference were “to frame and submit to the Security Council proposals which would, if accepted by both parties concerned, restore peace immediately to Indonesia and promote the early realisation of freedom by the Indonesia people.”

The conference also passed a resolution on January 23, 1949, which is seldom recalled. “The conference expresses the opinion that the participating governments should consult among themselves in order to explore ways and means of establishing suitable machinery, having regard to the areas concerned, for the purpose of promoting consultation and co-operation within the framework of the United Nations.”

This remained a dead letter. Shortly before he died in January 1966, on the conclusion of the conference at Tashkent with President Ayub Khan, Nehru’s successor Lal Bahadur Shastri proposed, on Dec 18, 1965, the formation of an Asian Organisation.

What has emerged, instead, are sub-regional groups of which the Association of Southeast Asian Nations (Asean) has proved the most successful and the South Asian Association for Regional Cooperation (Saarc) the least. Both experiments yield the same lesson. The former languished for quite some time because of Indonesia’s policy of confrontation with Malaysia over a territorial dispute. Kashmir keeps India and Pakistan apart. As long as they do not settle this, the Saarc will proceed as sluggishly as it has been doing since its establishment a quarter of a century ago. The highly successful Shanghai Cooperation Organisation (SCO) has flourished because China and Russia buried the hatchet.

For the first few years after independence, Pakistan and India voted together on a host of issues in the United Nations’ General Assembly. They are not the only offenders in their discord on the Asian continent. Territorial and other disputes abound in other areas of Asia as well and far more violently, too.

Saddam Hussein’s Iraq set the record. He first attacked Iran in 1980 with tacit support from his American backers. When he turned on Kuwait in 1990 the United States scented an opportunity. As Mohamed Heikal, the distinguished Egyptian journalist, shows in his magisterial work Illusions of Triumph, there was every likelihood of an intra-Arab solution; Saudi Arabia did not rush to denounce Iraq but the US secretary of defence, Dick Cheney, rushed to Riyadh on Aug 6, 1990, to persuade King Fahd to accept American troops on his soil. The far-reaching consequences of this move need no elaboration.

The region underwent radical change. American troops quit Saudi Arabia but American presence is a grim reality in the Gulf, and in Afghanistan. It is the same story as the East India Company exploiting Indian rulers’ differences to occupy India, which Zulfikar Ali Bhutto aptly recalled in a perceptive essay.

The 1949 vision of an Asian Organisation faded. But Asians have quietly settled for second-best — sub-regional bodies, from the Gulf Cooperation Council to the SCO, which has proved so successful that other states are queuing up to secure membership.

The SCO comprises China, Russia, Kazakhstan, Kyrgyzstan, Tajikistan and Uzbekistan. President Asif Ali Zardari and India’s external affairs minister, S. M. Krishna, are due to attend its summit at Beijing on June 6 and 7. Pakistan, India, Iran and Mongolia, which enjoy observer status, have been pressing for full membership for three years. Afghanistan is expected to join as an observer. Turkey is set to be accepted as a dialogue partner, while Sri Lanka and Belarus acquired that position in 2010.

A summit at which leaders from all these countries, as well as Presidents Hamid Karzai and Mahmoud Ahmadinejad, are present has a significance far beyond what even the founders of the SCO imagined.

The remarks made on May 23 by China’s vice foreign minister, Cheng Guoping, reflect the SCO’s confidence: “We welcome relevant countries to become members of the SCO. The relevant countries should work hard towards political, legal and technical preparations [for membership]. The relevant work is going on about expansion of membership. The decision should be made through consensus and consultation, and no timetable should be set. That is to say, when the conditions are ripe, the decision should be made through consensus.”

The SCO aims “to build a new type of state-to-state relations and a more just and equitable international order.” It is expected to issue a political statement that will stress its opposition to increasing western pressure on Iran.

The future lies in linking up such diverse bodies as the Saarc, the SCO and Asean.

SOURCE: dawn.com
Editorial Message
This site contains materials from other clearly stated media sources for the purpose of discussion stimulation and content enrichment among our members only.
whatsonsanya.com does not necessarily endorse their views or the accuracy of their content. For copyright infringement issues please contact editor@whatsonsanya.com