Beijing to join Hainan to waive visa, may get 3-day visit window 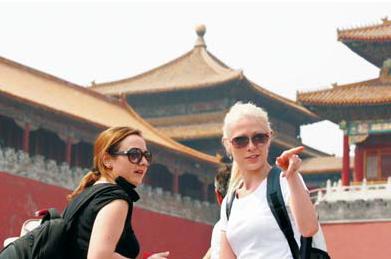 Tourists enjoy the Palace Museum on Sunday. Beijing is considering allowing tourists a 72-hour window to explore the capital without a visa. [Photo by Zhu Xinxing / China Daily]
Visa-free entry for Beijing under discussion

Beijing is considering allowing foreign tourists a 72-hour window to explore the capital without a visa.

Fu Zhenghua, the city’s director of public security, has confirmed that authorities are mulling over the move, saying it would represent a crucial sign that Beijing is open to the world.

Lin Song at the public security bureau’s exit-entry administration echoed that view on Sunday. "It’s expected that the project will attract more tourists from abroad."

Neither the bureau nor the Beijing Tourism Development Committee, which proposed the policy, would offer more details about the visa window when contacted by China Daily.

However, experts said the policy is expected to be similar to ones already being run in Shanghai (48 hours) and South China’s Hainan province (21 days for tour groups).

"Shanghai and neighboring cities, such as Hangzhou and Wuxi, have benefited greatly (since Shanghai introduced a visa waiver for transit passengers), as it means foreign tourists can travel during a 48-hour stay," said Jiang Yiyi, director of the China Tourism Academy’s international tourism development institute.

"With so many foreign people transiting in Beijing, the visa waiver program will allow many of them to tour around the ancient city."

A tourism analyst, who did not want to be identified, told China Daily that Beijing officials had considered a project last year that would allow visitors to stay in the capital for seven days without a visa. However, the idea was shelved.

"The newly proposed waiver would be a giant step forward, as the visa policy plays a crucial role in the country’s inbound and outbound tourism development," said Dai Bin, president of the China Tourism Academy.

Although China has relatively tight visa restrictions, and has few visa exemption agreements with other countries, Dai said the country has gradually loosened its visa policy in recent years. He said many cities worldwide have come up with visa waiver projects to attract more tourists, including Tokyo and Kuala Lumpur.

"A tight visa policy will only wave goodbye to those potential visitors," he said.

Li Xinjian, a professor of tourism at Beijing International Studies University, agreed and added that, as the number of Chinese tourists going abroad has soared in recent years, many countries, including the United States and Japan, have relaxed limits on visas to attract more tourists.

Foreigners traveling to China spent 4.7 billion yuan ($743 million) more than Chinese outbound tourists in 2008, he said. However, Chinese tourists spent 4 billion yuan more than them a year later, and the difference exceeded 24.1 billion yuan in 2011.

Bureau director Fu said the campaign was to make sure each foreigner is aware of China’s exit-entry regulations while curbing crimes by visitors who overstay or abuse their welcome.

In response to complaints from some sections of the expatriate community about the policy, the police issued a statement on Friday saying that the crackdown has not changed the city’s friendly attitude toward foreigners.

On the same day, Foreign Ministry spokesman Hong Lei insisted that there is no "anti-foreigner trend" in China, adding that the country will welcome and protect the legitimate rights and interests of the foreigners coming to China.

Jiang said she believes there is little possibility that the visa waiver would result in an increase of illegal residents among foreign tourists.

What is more important, she said, is to stimulate China’s inbound tourism.

"It’s vital that cities come up with reforms to boost inbound tourism," she said. "Other cities can learn from the experiences as well."

Wei Xiang, a professor of tourism management at Beijing International Studies University, said besides the boost to the tourism industry, the visa project will step up China’s diplomacy and foreign trade with countries in the long run as well.

"The policy will bring more benefits than we can imagine," he said.

"The scrutiny that the city is undergoing (the 100-day crackdown) will make sure there is better security and public order in the city," Fu said.

Previous news: Midnight flights from Perth in full operations, land in Haikou at 11:15am