Importance of Hainan fishermen in the Scarborough Shoal dispute 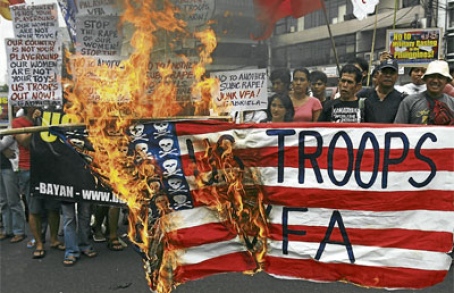 Filipinos protesting outside the United States embassy in Manila last week against the port call by the USS North Carolina, which is likely to spark off a major conflict that threatens to drag in the rest of Asean. Reuters pic
IT is lamentable, to say the least, that while Malaysians have had their appetite for sensational news sated in the course of the past few weeks, most of us have been unaware of developments closer to our shores.

Over the past few days, the political temperature in the region has been raised somewhat by a string of unexpected events. Firstly, the arrival of the American nuclear submarine USS North Carolina to Subic Bay, and secondly the despatch of five Chinese naval vessels (including two destroyers and two frigates, no less) to the South China Sea.

This has all been part of the escalation of tension that resulted from the conflict over claims on the Scarborough Shoal by both China and the Philippines, and there is now the real concern that what began as a dispute over claims may well escalate into something hotter and more devastating for the region.

The root of it is the competing claims between the Philippines and China over the area which both insist belong to them. Understandably, Filipinos feel that if any country can claim the shoal it is them, for even a cursory glance at any map will show that the area is evidently closer to the Philippines.

China, on the other hand, claims that it possesses historical evidence that Chinese fishing vessels have been fishing in the area for hundreds of years. Now that the USS North Carolina has materialised out of nowhere, security analysts are rightly alarmed that this may well spark off a major conflict that threatens to drag the rest of Asean into the fray.

For the benefit of Malaysians who are not familiar with the issues at hand, I would refer to the work done by Chinese strategic analysts like Li Mingjiang, who have written extensively — and objectively — on this thorny issue.

We labour under the mistaken impression that China is a homogenous country that thinks in a singular manner when addressing matters related to its claims to sovereignty, and we could not be more wrong. China is, in fact, an extremely complex country and before we jump the gun and make such bold claims we need to take into account several salient factors.

Firstly, we need to remember that over the past few decades China has experienced a steady decentralisation of power, where the central government installed in Beijing does not always have total power over local governments.

Looking at the Scarborough Shoal dispute it should be noted that the so-called aggressors are mainly Chinese fishing boats. (And not military vessels from the Peoples’ Liberation Army naval forces, PLAN.) Why? The reason lies in the fact that the local governments of provinces like Guandong and Hainan have been told to increase productivity to add to the state’s coffers, and in the cases of Guangdong and Hainan it also means increasing the yield of fishing.

We need to remember that the South China Sea is indeed rich with fish. It accounts for 10 per cent of the world’s annual fisheries output, and it is not surprising that when the local authorities of Guangdong and Hainan are expected to exceed their annual contributions, they will invariably encourage their fishermen to fish further from Chinese coastal waters.

Note that here I am not offering an excuse for Chinese fishing boats fishing close to the Philippines, but am trying to remind us that here we see the dynamics of local, as opposed to central, politics at work.

Secondly, it is assumed that any Chinese move into the South China Sea is motivated by the search for oil and gas. This is again not true. China’s oil companies seem reluctant to invest heavy capital such as offshore oil rigs in areas where there is no guarantee that their navy will protect them. Again, we need to go back to the basics: this is a fish war, and not oil or gas.

Thirdly, we need to also understand that in both the Philippines and China there is the considered opinion of state officials and the less considered opinion of the public. Sadly in both instances, the mass hysteria and anger unleashed by some (though not all politicians) has opened the way for aggressive mass nationalism in the most jingoistic of terms.

Talk of “national rights and sovereignty” may win some politicians votes, but it also inflames public anger and raises the tempers of millions. Once that has gotten out of control, both Beijing and Manila will be forced to take steps that they may regret in the future.

As an analyst who works on political violence, I am alarmed by these developments because I have encountered similar ones that got out of control. China has fought bruising battles at sea in the 1970s and 1980s with Vietnam, which took years to repair afterwards. Furthermore in the current climate of China-phobia, its policymakers recognise that it cannot afford to appear in the light of an aggressor.

A belligerent China will only send some Asean countries into the arms of the West, seeking assurance from superpowers like America. This would be unhealthy as the South China Sea has to be seen as a contested area between Southeast Asia and China, and nobody else.

Southeast Asian governments on the other hand have to realise that the simple fact is that Asean will have to deal with a China that will be a major contributor to FDI entering the region and which will be a vital economic partner for us.

Since 1967, Asean has managed, with notable success, to deal with the internal disputes within the region. Perhaps the time has come to use this form of negotiation and compromise — dubbed the Asean Way — to deal with China, too. In any case, angry rhetoric and flag-burning will get us nowhere, but already add more tension to an already overheated situation.

Next news: Mission Hill to spread brand/golf management throughout China