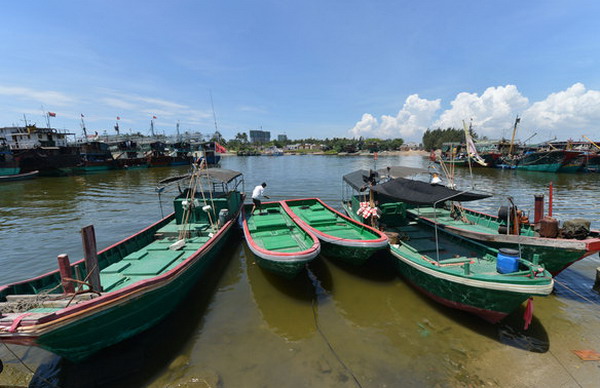 Boats are tied up at Tanmen port, Qionghai, Hainan province on May 15, 2012. A two-and-a-half month fishing ban took effect May 16, in most of the South China Sea. [Photo/CFP]
The Hainan provincial marine and fishing department said all 8,994 of the area’s locally-registered fishing vessels have been moored.

The annual fishing ban, which has been in place since 1999, will last from May 16 to August 1 this year, covering areas north of the 12th parallel, including Huangyan Island but excluding most of the Nansha Islands.

The fishing ban was adopted to promote the sustainable development of the fishing industry in the South China Sea and protect the fundamental interests of fishermen, said officials from the South China Fishery Administration Bureau under the Ministry of Agriculture (MOA).

Violators will face punishments such as fines, license revocations, confiscations and possible criminal charges, according to a statement issued by the fishery bureau under the MOA.

The provincial fishing authority said fishing vessels with fishing permits for the Nansha Islands are required to install and activate positioning equipment so they will not accidentally enter banned areas.

"Imposing the fishing ban is conducive to protecting fish during their egg-laying season, increasing fish stocks and improving the biological environment," said Tang Jianye, a professor specializing in maritime policy and law at Shanghai Ocean University.

The fishing ban is also applicable to foreign ships.

A spokesman from the fishery bureau under the MOA said earlier this week that fishing activity conducted by foreign ships in banned areas will be seen as a "blatant encroachment on China’s fishery resources."

The Yuzheng-310 and Yuzheng-303 law enforcement vessels were sent to the region by the MOA on Tuesday to conduct patrols.

After the ban was issued, the Philippines said it will ignore the ban, but may issue a fishing ban of its own.

"Our position is that we do not recognize China’s fishing ban, as portions of the ban encompass our Exclusive Economic Zone (EEZ)," according to a statement posted on the website of the Philippines’ Department of Foreign Affairs on May 14.

"However, the president has decided that, in view of the accelerated depletion of our marine resources, it would be advisable for us to issue our own fishing ban for a period of time to replenish our fish stock," it said.

Foreign Ministry spokesman Hong Lei said on Monday during a regular press conference that the fishing ban "is not related to the ongoing Huangyan Island incident."

Tong Xiaoling, China’s ambassador to the Association of Southeast Asian Nations (ASEAN), said Wednesday that China has every right to defend its sovereignty and protect its fishery resources.

The ban comes amid an escalating sovereignty dispute between China and the Philippines over Huangyan Island. Tensions started on April 10, when a Philippine warship harassed 12 Chinese fishing vessels that had sailed near the island to seek shelter from inclement weather.

China has repeatedly stated that Huangyan Island is an inherent part of its territory and that the surrounding waters are historic fishing areas for Chinese fishermen.