10 students from Dallas to take Mandarin immersion program in Hainan 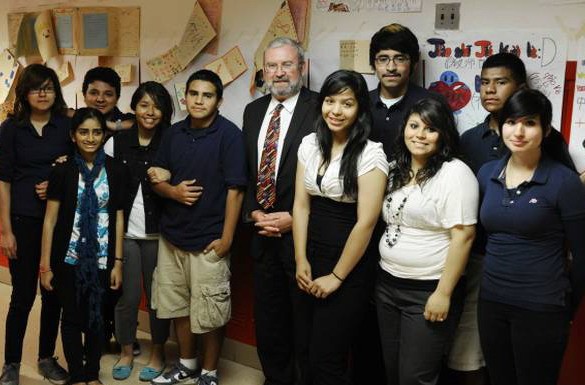 Eddie Conger (center), principal at Thomas Jefferson High School, says learning Mandarin Chinese prepares students for the world economy of the future. These 10 students will be traveling to Hainan province in southern China this summer for a four-week Mandarin immersion program.
How many times have you heard business leaders say that Dallas won’t be a great city until its public schools are great?
Eddie Conger, principal of Thomas Jefferson High School, is doing his part.
The retired U.S. Marine officer has marshaled forces to teach Mandarin Chinese at the predominantly Hispanic school. Some 400 students — nearly a third of its enrollment of 1,378 — are taking Chinese classes this year.
"It is so important that we look long term,” says the 53-year-old principal of Thomas Jefferson, which is on Walnut Hill Lane in northwest Dallas.
"The Chinese are the second-largest economy in the world, rapidly headed to becoming No. 1. We need to be preparing our kids for that world economy.”
On Tuesday, Conger announced the winners of a competition that will send 10 students to a four-week Mandarin immersion program in Hainan province in southern China. Hainan Overseas School in Haikou is hosting the students, who will stay, eat and learn for free.
But travel costs aren’t included. And they amount to $35,000 that’s not in Conger’s budget.
This time last week, he faced a $7,000 shortfall.
Celanese Corp. and Southwest Airlines Co. got wind of his predicament and stepped in. Celanese is donating $7,000, and Southwest is flying the students and a teacher to and from Seattle, where Conger hopes to land a much cheaper airfare.
Interests aligned
Peter Broussard, director of business strategy and development at Celanese, says the gift made sense for the multinational company, which draws nearly 40 percent of its revenue from Asia, primarily China.
"I was in Haikou just four months ago,” he says, “so I found it really interesting that a school here was trying to get some students to learn Mandarin, which is so critical to business.”
Sergio Carrillo, who will be a senior taking Chinese IV in the fall, placed first among the 15 contestants on Monday.
Learning Chinese has given the 17-year-old, who speaks Spanish at home, a well-defined vision of his future: He wants to be an international accountant for KPMG in China.
Carrillo is a bit intimidated about going so far away. “But I’m sure it will be an exciting experience,” he says. “I’m planning to learn a lot — not just the language, but the culture.”
Newly elected DISD trustee Elizabeth Jones was on hand to congratulate the students.
"These kids, in the not-too-distant future, will be the workforce that we depend on,” she says. “The corporate community’s interests and the interests of the school are perfectly aligned.”
Turnaround at T.J.
In 2008, Conger was hired to tackle the Thomas Jefferson campus, which was known for drugs, gangs and dropouts. It was academically ranked 19th out of 22 regular high schools in DISD, and only half of its students graduated.
Today it ranks second in test scores and has a 75-plus percent graduation rate, among DISD’s highest.
One key initiative was adding Chinese to the curriculum in 2009. The program has grown from one teacher and 90 students to four teachers and more than 400 students. Next year, the school hopes to be able to get dual credit with Brookhaven College for its Chinese IV class.
More than half of Thomas Jefferson’s students don’t speak English at home. So why complicate things by adding Chinese?
"You build on that success,” Conger says. “They’ve already mastered two languages. That part of the brain is already functioning.”
Conger relates to his students because his economic situation growing up was similar to theirs.
He was raised with his sister by a single mom on a farm in Hillsboro and was the first member of his extended family to go to college. He learned his work ethic from his mother, who farmed, worked in a sewing factory, managed a convenience store and drove a long-haul truck.
Conger worked the fields, milked cows, drove tractors and hauled hay, “all of which made me realize I needed to do something easier than work for my mom, so I joined the Marine Corps.”
In 2001, Conger retired from the Marines after 20 years of service that included leading an infantry company into combat during Operation Desert Storm in 1991 and serving as senior staff officer of the 3rd Marine Division in Okinawa, Japan.
It would be good preparation for taking over Thomas Jefferson.
For example, Conger established the Patriot Homework Academy. A student who doesn’t turn in a homework assignment has to stay after school until 6 p.m. to complete the work, he says. “If the student fails to go to the Patriot Homework Academy, the next day they are picked up by an adult and must walk 12 laps [3 miles] around the track to think through making better choices.”
Conger isn’t going to China with his students. DISD’s new superintendent, former Army Ranger Mike Miles, has other plans for his principals this summer.
"It’s wonderful,” Conger says. “He’s a former infantry company commander. I was an infantry company commander. I love it.”
SOURCE: dallasnews.com

Next news: Property sales in Haikou see rebound of over 100% last week