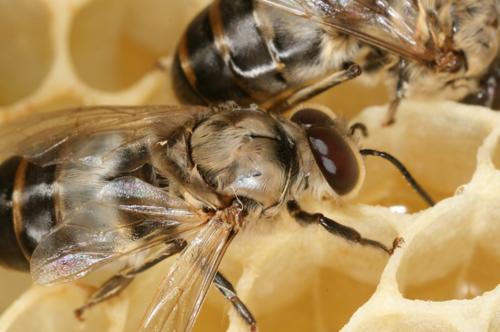 The results, published in the current issue of PLoS ONE, focused on giant honey bee colonies on Hainan Island, off the coast of China. Since these bees have long been separated from their continental cousins, it was thought that the island bees would be prime candidates for inbreeding as well as having very different genes, said Zachary Huang, Michigan State University entomologist.

"We believed that the island bees would show evidence of the founder effect, or random genetic changes in an isolated population, on a unique sex determination gene from the mainland bees,” he said. “At first we were surprised when we couldn’t document this effect. Looking at it further, I asked myself, ‘Why didn’t I think of this before?’”

One particular gene can have alleles – the “flavor” of genes. In humans, they dictate hair and eye color. In bees, though, they are responsible for creating females (worker bees), fertile males (that mate with the queen) or infertile males (diploid males which serve no purpose).

The voila moment came once Huang estimated the bees’ mating habits and the potential of CSD allele combinations. That’s when he understood why he couldn’t confirm the founder effect. Keeping the CSD mix diverse is one of the keys to maintaining a healthy hive, he said.

The island queens carry around 40 CSD alleles. Since they mate with nearly 100 males – each also harboring around 40 alleles – the high number of healthy genetic combinations keeps the gene pool diverse. By using natural selection to create healthy offspring, the bees perpetuate a healthy colony.

In comparison, if the island bees adopted the breeding habits of fire ants, with queens mating with a single male, inbreeding could wreck the off-shore claves or distinct populations of bees. The devastating change would reduce the fitness of the hive, decreasing the female workforce, as well as lowering the number of mating males.

What would be left would be an unhealthy hive with higher numbers of diploid or infertile males, with the same alleles, Huang said.

By extending his research beyond Hainan Island, Huang found evidence that showed that the island wasn’t an isolated case.

"We failed to find any clustering of the bees’ CSD alleles according to their geographical origin; the Hainan and mainland bees did not form separate clades,” said Huang, whose research is supported by MSU AgBioResearch. “Previously published CSD sequences also failed to show any unique clade-forming in the Philippines and Malaysia.”

SOURCE: westernfarmpress.com
Editorial Message
This site contains materials from other clearly stated media sources for the purpose of discussion stimulation and content enrichment among our members only.
whatsonsanya.com does not necessarily endorse their views or the accuracy of their content. For copyright infringement issues please contact editor@whatsonsanya.com