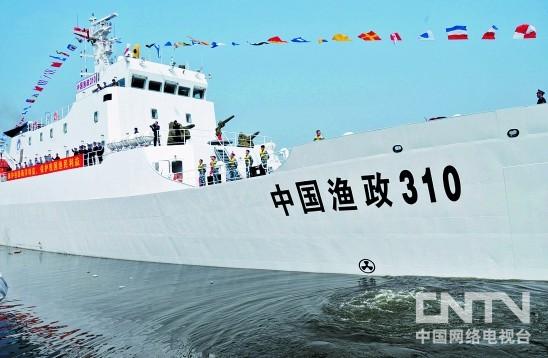 China’s most advanced fishery patrol ship on Friday arrived in waters off the coast of Huangyan Island in the South China Sea, where Chinese fishermen were harassed last week by a Philippine navy gunboat, drawing protests from Beijing.

The 2,580-tonne Yuzheng-310 set sail from the southern port city of Guangzhou on Wednesday. Its mission is to protect China’s territorial waters and ensure the safety of Chinese fishermen, said a statement released by the South China Sea Fishery Bureau under the Ministry of Agriculture.

"In the period of time that follows, the ship will go on regular patrols, help Chinese fishermen in the area and look into other issues concerning fishing activity there," the statement said.

The Yuzheng-310 is equipped with advanced marine technology and has the ability to carry helicopters. The ship’s maiden voyage was made to the Diaoyu Islands in the East China Sea in 2010.

China’s fishery authorities have sent ships on patrol and shoal-guarding missions in the South China Sea 16 times so far this year.

Patrols in the South China Sea were beefed up to protect the country’s maritime rights and interests, as Chinese fishing boats have been frequently harassed or seized by armed ships of neighboring countries, officials have said.

Dai Yudao, a local official from the fishing town of Tanmen in Hainan province, said more than 700 of the town’s fishermen have been arrested, robbed, assaulted or rudely asked to leave by the armed forces of neighboring countries while fishing in the South China Sea over the last 12 years.

"We are frequently harassed by foreign ships in waters near the disputed islands and shoals," Dai said. "Our lives are threatened. But we will not back down, because locals have been fishing in the South China Sea for generations."

In the most recent case, twelve Chinese fishing boats were harassed on April 10 by a Philippine Navy gunboat while taking refuge from harsh weather in a lagoon near Huangyan Island.

Vice Foreign Minister Fu Ying on Wednesday summoned the charge d’affaires of the Philippine Embassy in China to lodge a representation over the incident at Huangyan Island following a previous summons on Sunday.

Fu said the harassment of Chinese fishermen by a Philippine naval ship in a lagoon near Huangyan Island has aroused "great concern" on the part of China.

Huangyan Island is an integral part of Chinese territory, Fu said, adding that there is no basis for the Philippines’ claim to the island and that China cannot accept their claim.

Liu said on Wednesday that China and the Philippines are maintaining diplomatic communication concerning the issue. VIETNAMESE FISHERMEN RELEASED

Friday’s patrol came as Chinese authorities released 21 Vietnamese fishermen and their two fishing boats after detaining them for over a month at the Xisha Islands over allegations of illegal fishing.

The fishermen were released after they guaranteed in writing not to infringe on China’s maritime rights in its territorial waters, the South China Sea Fishery Bureau said.

A Chinese patrol ship apprehended the fishermen in waters near the Xisha Islands on March 4 and held them on Yongxiong Island. The Vietnamese fishing boats were loaded with 25 kg of explosives and other equipment for blast fishing, as well as hundreds of kg of fish.

The Xisha Islands are a chain of islands scattered along the western part of the South China Sea near Vietnam.

China has conducted regular patrols near the Xisha Islands since 2004, investigating 69 fishing boats over alleged illegal fishing. Eight of the boats were confiscated, and maritime authorities seized more than 900 kg of explosives used in blast fishing.

China has repeatedly reiterated its sovereignty over the Xisha Islands and its adjacent waters.

In a press conference last month, Foreign Ministry spokesman Hong Lei urged the Vietnamese side to take effective measures to educate its fishermen and stop illegal fishing operations near the islands.

He said checks of vessels operating in China’s territorial waters are in accordance with Chinese law and are part of legitimate law enforcement efforts.

China has also engaged in tourism development in the area. Earlier this month, a private cruise ship, the Princess Coconut, completed a voyage to Xisha Islands in search of potential cruise routes for future development. A timetable for the launch of a tourism project in the region has yet to be announced.

Previous news: Rainfall eases in Sanya, Hainan, another round to hit Tues, Wed