HomeNews & Social MediaHainan NewsChina ambitious urbanization ? We build them and the people will come

China ambitious urbanization ? We build them and the people will come

Updated: 2012-04-12 09:33:58
As China industrializes, it wants to urbanize its population. Since the 1980’s, it has policies which keep the property developers buoyant and hugely profitable. Just recently, China urban population has surpassed 50% and it is set to reach 70% in the next decade or 2. The demand for housing will no doubt continue, but is the property development going too fast, and it is creating a glut?

Over the Chinese New Year, I went to one of the rather more bubbly spots in China (mainly for holiday, but also to watch some ludicrous pace of property development). Hainan province, a south-most province of China, known probably for its hot weather (among others that I know and don’t know), is dubbed as the Hawaii of China. And as the matter of fact, this is not the first property bubble for Hainan (as explained previously).

Most of these new properties are built and sold around the theme that a warm weather makes Hainan a popular location for northerners to have their winter holiday, as they hate the cold weather in the north but can’t stand the hot weather of Hainan’s summer. Local people called these northerners “seasonal birds” as they only appears in winter months. Besides residential properties for sales, investments in hotels are also enormous, particularly in the popular places for tourists and some areas designated for resort development, mostly along the coastlines and beaches which were previously almost uninhabited.

With the help of friends who live in one of the small towns in Hainan, I was able to look at these properties in a way that no tours can offer, as we sneaked into construction sites, sales office, and unoccupied houses.

To start with a bit of a joke, we came across with a development with a huge banner welcoming homeowners to their homes. 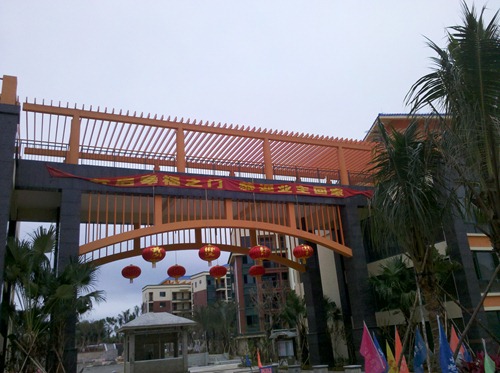 "Welcome Home”
Walking inside, this is what could be seen. 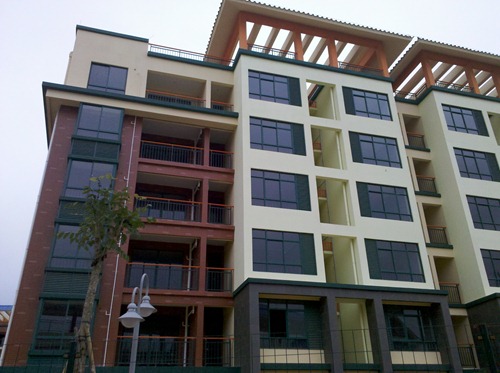 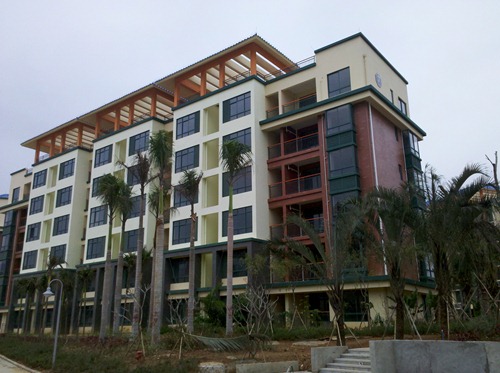 Anyone here?
Right, it is absolutely empty.

As said, along the coastline of the Hainan Island, many of the beaches and the neighbouring lands have been earmarked for tourists resort/”seasonal birds” property developments. Along the highway that goes around the Hainan Island (particularly in the east side of the island), you can probably find major property developments at or close to every exit of the highway. Clear Water Bay developed by Agile property (3383.HK) is just among many of them. 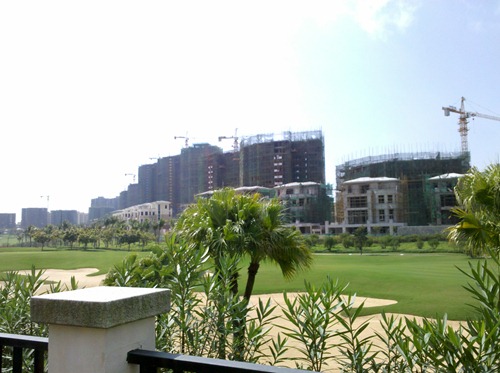 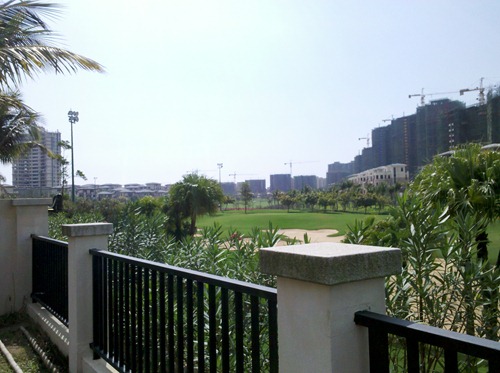 Still a lot of large buildings under construction
Shenzhou Peninsula is another ludicrously ambitious development. Close to a small city of Wanning, the whole previously uninhabited peninsula is now earmarked for yet another tourists resort/”seasonal birds” property development. Apparently being divided among more than one developers (including Citic Pacific), this 18 sq. km. piece of land will have hotels, residential and commercial properties, golf course, etc. The whole area was circled in red, while the box represents what I could actually see standing the spot represented by the cross.

These are what one can see now on the spot: 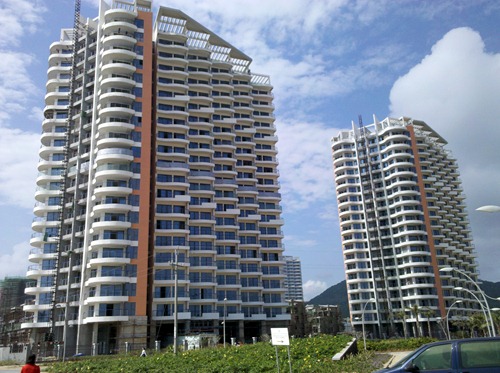 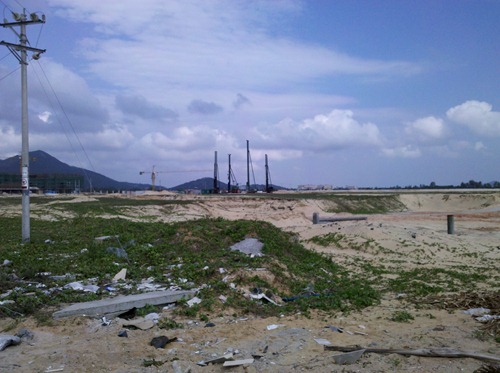 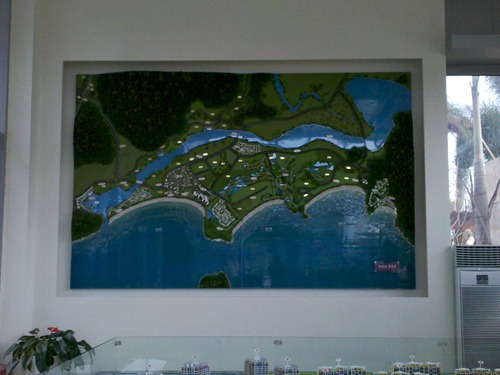 The overall planning for the whole thing
Besides massive sites across the coastline, you can also see so completely ludicrous Dubai-ish development, like this one in Sanya, which is a man-made island off the coast of Sanya: 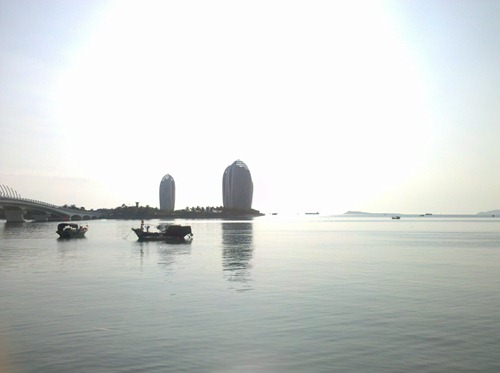 Or this at an unknown location, as seen on the telly, which is very Dubai-ish: 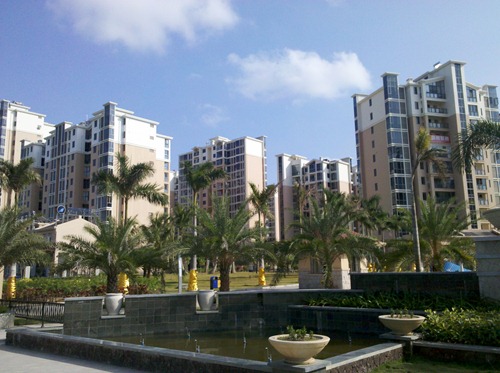 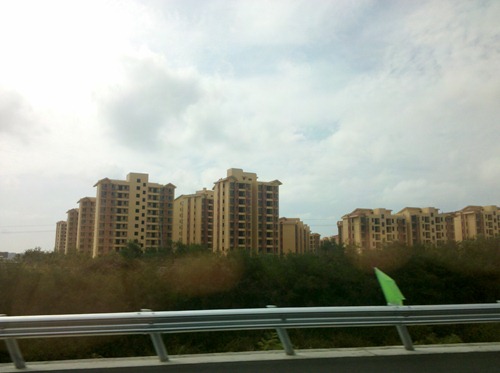 In Xinglong Town, a town with population in the order of tens of thousands, a developer aims to develop a community of 100 thousand people. Here’s the first phase of the whole thing: 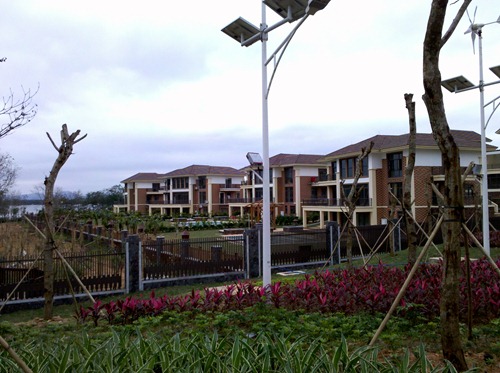 And you can see other empty properties along the main street of the “tourist area”: 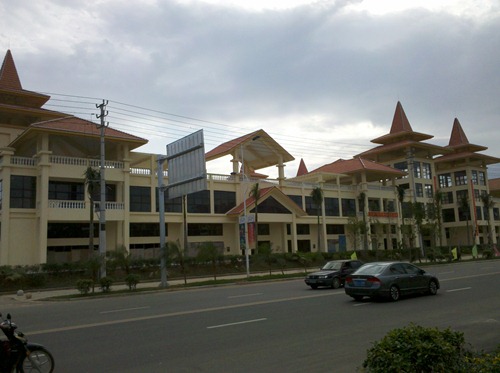 Yes, as if you haven’t got enough properties around a small town, developers are still building more. 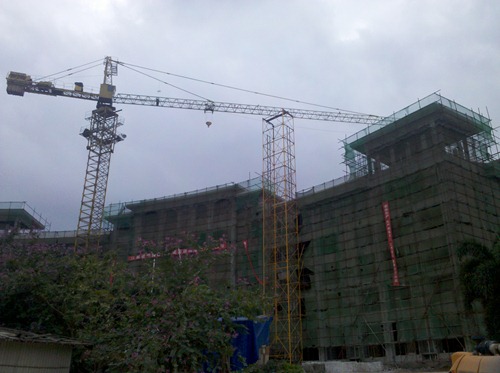 Local people said, however, that no local people would ever buy them. Those are for northerners. Asking local people on their views on when all these properties will be occupied, their answer is “never”.

While Ordos, Zhengzhou new district and others have been popularised in Western media as the “ghost cities” of China, a manifestation of the Chinese property bubbles, empty properties are just too easily found in China, just probably not at that kind of scale as one could see in those now-famous ghost towns.