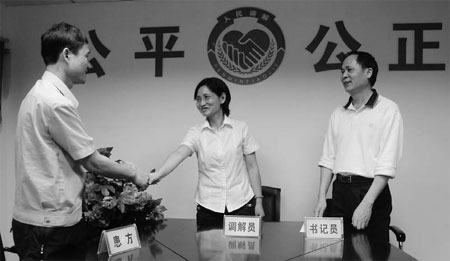 A patients’ representative greets a mediator from Hainan People’s Medical Dispute Mediation Committee in South China’s Hainan province on Friday.
Li Dongmei had not expected to settle her husband’s medical dispute only two days after turning to the Hainan People’s Medical Dispute Mediation Committee, an independent organization with no government affiliation.

The migrant workers from Sichuan province signed an agreement on March 22 with a local public hospital after mediation by the committee. They received 40,000 yuan ($6,300) in reimbursement for her husband’s medical bills, plus 10,000 yuan as compensation.

In August, her husband, Wu Zuxiong, broke his leg in a car accident and was sent to the hospital for treatment. Several months later, the metal plate implanted in his leg broke and caused an infection.

"They gave him a second operation but refused to take responsibility, citing that the problem might be with the quality of the plate," Li recalled.

Failing to reach an agreement, on March 20 she turned to the committee, which was established in 2010 mainly to help patients mediate with hospitals in the event of disputes.

"The case was closed two days after our mediation, and the compensation was distributed shortly after they signed the agreement," said Cen Haifang, the mediator for the case.

Wu is now recovering well at the hospital and Li was happy with the resolution.

"We have no money or connections here and want instant resolution," she said.

The couple’s other options included seeking a lawsuit, which costs time and money, said Chen Xingming, deputy director of the committee.

"But we’re providing free and quick services," he said. Usually, a case can be closed within 10 days.

The committee receives 10 percent of the premiums to maintain its operations, he said.

To date, about 270 hospitals across the island province, mostly big public hospitals, have participated in the policy, statistics from the provincial health department show.

Once the mediation draws to a close with a signed agreement, the insurance company pays out compensation in two days.

The quick compensation also helps prevent a medical dispute from developing into a violent one, he said.

Bai said Hainan had no violent cases last year, but in the past, they had seen five or six incidents a year involving assaults on medical workers or mass patient protests at hospitals.

The effort by the committee of 30 workers specializing in law and medical care has paid off as lawsuits related to medical disputes in the province have decreased substantially, Bai said.

"Now more than 80 percent of medical disputes are settled via the committee," he said.

"It also helped health authorities administer hospitals in a more specific way," he said, citing published information about medical disputes at each hospital.

According to Bai, hospitals previously tended to cover up disputes with patients and would not disclose the amount of compensation for fear of tarnishing their image.

In the United States, nearly all states require doctors to buy liability insurance from either a commercial company or mutual company.

Individual premiums vary according to the provider’s risk levels.

China has no clear rules about such insurance, and a lot of hospitals tend to settle disputes directly with patients, according to Yang Jinrui, deputy director of the information office of the Ministry of Health.

"That would burden the hospital economically and give rise to the attitude that violent and extreme approaches by patients – even physical attacks – usually lead to more compensation," Bai said.

According to a 2007 nationwide survey, which polled more than 13,500 people, 45 percent felt the doctor-patient relationship was very tense.

On the doctors’ side, 91 percent of the 2,400 medics surveyed by the Ministry of Health in the same year felt huge pressure from daily work.

The Hainan model might be expanded nationwide to address the situation, Yang said.

But some hospitals on the island expressed caution over the initiative.

"We’re not sure about the legitimacy of the mediation result, and patients might still sue us again or make trouble for us if they become dissatisfied," said Miao Bo, a staff worker with the medical affair department of Hainan Provincial People’s Hospital.

Previous news: A day in the life of a watch captain onboard Sanya with VOR