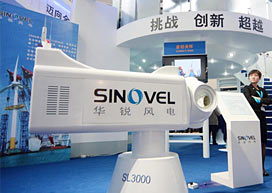 AMSC, a former star of the US clean energy sector, is seeking $1.2bn from turbine maker Sinovel through three lawsuits and an arbitration dispute in Beijing.
The Chinese turbine maker was once AMSC’s biggest customer, accounting for 70 per cent of revenues in late 2010. The US company alleges that Sinovel made unauthorised use of proprietary turbine software code and breached its supply contracts. Sinovel has denied wrongdoing in previous statements and did not respond to requests for comment on Monday.

AMSC’s experience is seen by many foreign executives in the wind industry as a sign of the lurking dangers for foreign businesses in China. The company’s share price plunged more than 80 per cent last year when its relationship with Sinovel turned sour.

AMSC, formerly known as American Superconductor, on Monday lodged an appeal with China’s Supreme Court, asking for the reversal of a court decision in Hainan, the group said.

The Hainan Supreme Court last week upheld a lower court decision to throw out AMSC’s copyright suit against Sinovel and Sinovel’s subsidiary Guotong on the grounds that it should be covered by arbitration proceedings. Although the case in question is the smallest of the lawsuits – it seeks a cease and desist order for alleged intellectual property infringement and approximately $200,000 in damages – it will raise the stakes in the acrimonious dispute.

"We look forward to the Supreme Court’s review of this matter and believe the grounds for overturning the Hainan decision are quite strong,” said Mr Powell. “The decisions made regarding this clear-cut case could have profound consequences for businesses in China.”

China has the biggest installed wind capacity in the world, having overtaken the US in 2010, although China’s wind installations have slowed as the government has tightened regulations in an effort to raise standards.
Chinese turbine makers like Sinovel and competitor Goldwind are trying to increase their presence overseas in markets that have long been dominated by Western turbine makers like Vestas and Gamesa.
Last September a former AMSC employee confessed to selling proprietary software to Sinovel and was sentenced to one year in prison by an Austrian court.
The other two legal cases initiated by AMSC against Sinovel are in Beijing and cover alleged copyright violation and alleged trade secrets theft. Hearing dates have yet to be set for those cases. Meanwhile arbitration hearings are under way between Sinovel and AMSC, both of whom accuse each other of contractual violations and have asked for damages.

SOURCE: www.ft.com
Editorial Message
This site contains materials from other clearly stated media sources for the purpose of discussion stimulation and content enrichment among our members only.
whatsonsanya.com does not necessarily endorse their views or the accuracy of their content. For copyright infringement issues please contact editor@whatsonsanya.com