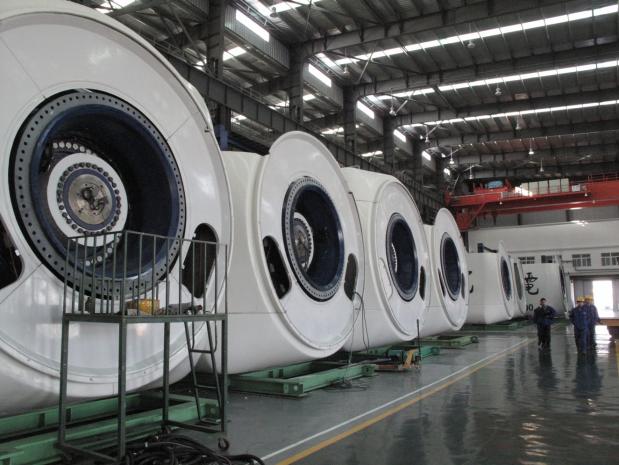 Sinovel’s plant in Gansu, China
US wind technology group AMSC has lost an appeal in a Hainan court, where it sought to sue former customer Sinovel and related companies for alleged intellectual property theft.
The case was one of three civil suits that the US firm has filed in China over claims that Sinovel stole code required for its software for low-voltage ride through (LVRT) technology used in wind turbines.

The Hainan Supreme court ruled this week in support of Sinovel, which had claimed the court has no jurisdiction over the matter. AMSC had appealed an earlier ruling by a lower court, the Hainan Province No 1 Intermediate People’s Court, which also found in Sinovel’s favour.

A spokesman for AMSC says: "We are reviewing the court’s decision and will continue to press forward with our cases".

The case is the next stage in a legal battle launched last year by AMSC, in which it is seeking more than $1.2bn in damages and contracted shipments from its former customer Sinovel.

The Hainan case was against Dalian Guotong – a power converter maker part-owned by Sinovel – and Huaneng Hainan Power Company (HHPC), a subsidiary of China Huaneng Group, one of the country’s "big five" utilities.

AMSC wanted them to cease using allegedly stolen software in their products and was looking for around $200,000 in damages.

Sinovel was required to be a third party in the case.

However in December 2011 the Chinese company filed a jurisdiction opposition motion requesting its dismissal by the Hainan Province No 1 Intermediate People’s Court, arguing that the case should be governed by the Beijing Arbitration Commission, the commercial arbitration body currently hearing a separate series of contractual disputes between AMSC and the Chinese turbine maker.

In February, the Hainan court granted Sinovel’s motion and threw the case out. AMSC appealed but the appeal was this week denied by the Hainan Supreme court, according to a stock exchange announcement by Sinovel today.

The Hainan Supreme Court notified Sinovel on 1 April that it had “rejected the appeal” and would “maintain the original ruling”. It adds that “this ruling is the final verdict”, according to the statement.

AMSC had previously said that the Hainan case is the smallest of its actions underway in China against Sinovel.

Sinovel has also sought to have the case in the Beijing No 1 Intermediate People’s Court transferred to the Beijing Arbitration Commission but this application has been rejected, AMSC said in February.

The arbitration case got underway in Beijing in late February.

SOURCE: rechargenews.com
Editorial Message
This site contains materials from other clearly stated media sources for the purpose of discussion stimulation and content enrichment among our members only.
whatsonsanya.com does not necessarily endorse their views or the accuracy of their content. For copyright infringement issues please contact editor@whatsonsanya.com

Next news: Puma crosses the line 1st at Itaja, 12 minutes before Telefonica