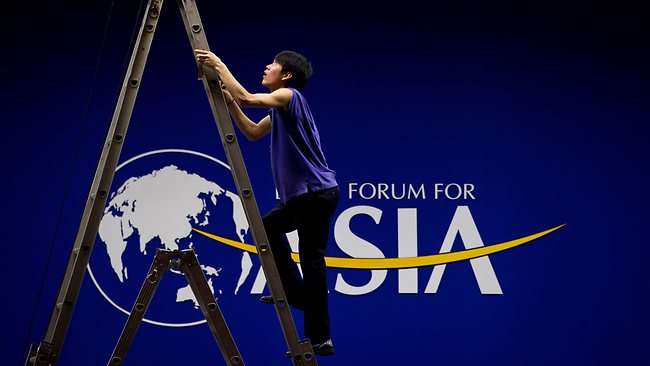 A lighting technician climbs a ladder at the Boao Forum, to which Australia failed to send a government representative, again Source: AFP
ANDREW Forrest looks relaxed for the first time in four days as he opens the door of the Presidential Suite whose floor-to-ceiling windows frame sweeping views of the palm-fringed estuaries of Boao, a booming tourist resort on the Chinese island of Hainan.

As one of three major sponsors of China’s premier international business conference, the Boao Forum for Asia, he keeps a frantic pace and everyone wants a piece of him. But he gets prime digs.

The BFA is highly important for the Chinese government, which styled it as the Asian version of the World Economic Forum in Davos. It has utterly dominated the country’s media for the past three days. Yet the Gillard government failed to send any minister or other government representatives, with only a last-minute dash there by the Australian ambassador in Beijing, Frances Adamson, avoiding complete embarrassment.

"We have dropped the ball," the Fortescue Metals chief tells The Australian, echoing comments reported exclusively in this paper yesterday by former prime minister Bob Hawke that the Labor governments under both Kevin Rudd and Julia Gillard had allowed the relationship with China to "languish".

"This year Australian stocks have slipped markedly because of our lack of representation at Boao," Forrest said.

Only a day earlier Forrest held a spontaneous lunch with Wang Boming, one of China’s most powerful publishers who helped create the Shanghai Stock Exchange and runs ground-breaking business magazine Caijing with a group of other high-flying business people.

In China connections, or guanxi, are everything. Success is all about knowing people, networks, and using them. It’s about face-to-face time, and about the very Asian concept of face.

Forrest has built his multi-billion-dollar empire on the back of Chinese connections and investment and understands this as well as any Australian. As the conference winds down to its final evening, Forrest has a pointed message for the Australian government: lift your game on China, stop taking our largest trading partner for granted and do it fast. "In the major trading forums where the decisions are made, we want Australia to have a good hearing," Forrest says.

"(Trade Minister) Craig Emerson came up last year and did a very good job but he was on his own. But in 2010, once again there were no Australian government representatives. I urge Julia Gillard to come next year."

But the problem of Australia’s increasingly spiky relationship with China runs much deeper than just one conference, no matter how important. There has been just one prime ministerial visit to China since the Beijing Olympics – two days in Beijing by Gillard last April.

Rudd made two visits to China as foreign minister but neither was considered official by the Chinese, as he did not confer formally with his counterpart, Yang Jiechi, despite talking with him informally at Shanghai Expo.

Rudd’s brief trip to Guangzhou to launch his China 2.0 project and to visit second- and third-tier cities – which Emerson followed with a business delegation – included a night-time visit to Labor donor Chau Chak Wing.

China, on the other hand, has sent one of its top nine leaders – the all-powerful Communist Party Politburo Standing Committee – to Australia each year for the past decade. In terms of face, we are giving them none.

China is the singular reason we have avoided the ugly economic fate of other OECD nations. Our two-way trade with China tops $110 billion, of which almost $40bn comes from iron ore alone. China now makes up about 25 per cent of Australia’s trade and this is set to climb further.

This week the Australia China Business Council released figures that showed every Australian benefits to the tune of $13,500 a year from trade with China.

"If the average representation of our political statesmen continues not to reflect our trade and the hard-working diplomatic executive, it will directly affect the standard of living of every Australian in the next decade," Forrest says.

His comments are echoed by Hawke. "There has just not been the level of visitation that my government established and has generally been maintained ever since then," Hawke said.

"I think it’s fair to say that we had as good a relationship with China as any country did. I think we basically had a situation that in a commercial situation if all things were equal, there would be a tendency to go to Australia. I doubt if that is the position now."

The Chinese government has committed to sending its top leaders and policymakers to the conference each year. This year it was the turn of premier-in-waiting Li Keqiang to give the keynote speech. Li is expected to take the reins as the head of China’s official government, replacing Wen Jiabao. His message about the importance of Asia was all too clear.

And it’s not just high-level visits but a lack of consular infrastructure as well as regular bilateral meetings by politicians on a range of topics including commerce, trade and defence such as we have with the US and Britain.

Hawke says: "They have been very slow in opening up new consulates, something I have been pressing for for a long time – years – and I am glad to see they have finally opened one in Chengdu."

The government’s announcement two weeks ago that it would open a consulate in China’s booming western region came after more than a half a decade of pushing by senior diplomats and former politicians such as Hawke. We have trailed minnows such as Denmark and Ethiopia.

The only Australian politician to visit Boao this year, opposition foreign affairs spokeswoman Julie Bishop – who impressed Australian business people such as Forrest with her grasp of the importance of the China relationship – said the issue of the bilateral relationship was raised in a range of meetings with senior Communist Party officials over the weekend.

"They (the Chinese) are seeking a deeper and broader relationship with Australia," said Ms Bishop, who was on her fourth trip to China in the past 12 months. It is she and Malcolm Turnbull, rather than Tony Abbott, who have held up the China relationship for the Coalition and she will be here again later this month.

Along with Nationals leader Warren Truss, Bishop is planning an opposition frontbench delegation to China in August.

The increasingly vexed problem of high-level visits aside, the government has made several missteps in the China relationship.

These include the naming of China as a threat in the 2009 defence white paper and the knockback of state-owned miner Chinalco from taking a larger stake in Rio Tinto the same year. These still rankle with Chinese officials used to playing a long rather than short-term political game.

At the same time as Gillard and Barack Obama announced a deal to allow US troops to be based in Darwin, Guangzhou businessman Matthew Ng was handed a shockingly heavy sentence – 14 years reduced on appeal last weekend to 11 1/2.

Some observers think that, as with the investigation into Rio Tinto executives including Australian Stern Hu for bribery and industrial espionage that followed the Chinalco knockback, the timing and weight of the Ng sentence were not just coincidence.

The latest fumble has been over the banning of privately owned Chinese company Huawei Technologies from bidding on the National Broadband Network for "national security" concerns.

This was raised publicly by senior Chinese executives and Communist Party cadres at Boao very deliberately for the first time.

Gillard and Emerson have expressed confidence that Australia’s decision will not damage its relationship with China.

"There is no reason to believe that China does or doesn’t do what any other nation does with regard to spying," Forrest says. "But what I don’t understand is why they were singled out publicly. If you were really genuine in your concern, we have a very strong ambassadorial presence up here: you would use them to ensure that they didn’t bid for the NBN and that would have been it. But to have them on the front page of every paper seems unjustified.

"They are perplexed; they have pointed out that the competitors to the NBN will, no doubt, be (from) those countries that have facilitated intelligence activities against China."

Hawke says that while it is hard for a government to reject ASIO’s advice, the decision was worth testing a little wider considering that defence allies such as Britain and Singapore had let the company into similar projects.

"It seems to me that the government should test some of these things with the governments of Singapore and the UK (where Huawei is deeply involved in the two countries’ NBNs)," Hawke says.

"I think it needs further examination but I can understand the initial decision after they got advice from the security agency. But, as I understand, they haven’t interviewed the company and it would seem reasonable they ought to be interviewed."

Beijing has also noted the increasingly shrill debate from the Nationals and other fringe conservative groups – led by deputy prime minister wannabe Barnaby Joyce – about China "buying up the farm" despite China still being only Australia’s 12th largest foreign investor.

"I think the glory days are over; there is a lot of competition out there (among rival nations) for the China dollar," a senior Australian bureaucrat told The Australian.

"It’s going to be much harder for us now."

Both Hawke and Forrest are hopeful that the appointment of Bob Carr as Australia’s Foreign Minister will help to rectify the situation.

Gillard finally visited China last year, having dodged the country while education minister despite the fact it forms the backbone of our $16 billion-a-year international education sector. But observers noted how backward-looking her speech in Beijing was.

Hawke says Rudd’s handling of the China relationship left "a fair bit to be desired", although he said that as a Mandarin speaker and former diplomat in China "perhaps he didn’t want to be seen as a China toady and I think he probably overcompensated.

"I think Julia has to put a lot more work into China. I believe – and others have too – it’s a relationship that the Prime Minister themselves should handle."

State premiers such as Colin Barnett,Ted Baillieu and Barry O’Farrell – all of whom have trips planned this year – have travelled more extensively in China than Gillard or Rudd in recent years.

Right now it is former leaders such as Hawke, Paul Keating, Mark Vaile, John Howard and Alexander Downer who are propping up Australia’s senior political ties with China. But that’s just not enough any more.

Next news: SuperYachtTimes.com & YachtsX are on-site media for Hainan Rendezvous