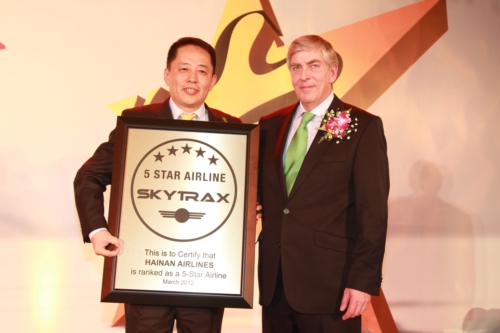 Skytrax’s yearly issued reports, including airline and airport rating reports, are a widely recognized and respected evaluation of the quality of airline services and have become a globally recognized mark for the quality of airlines’ products and services. Commenting on Hainan Airlines’ receipt of the award once again, Skytrax Chairman Edward Plaisted said, "After becoming the first airline in mainland China to be awarded the honor in 2011, Hainan Airlines has continuously enhanced the quality of services, including cabin and ground services, while maintaining high standards in service as a five-star airline. For this reason, Skytrax decided to award the title of the ‘Five-Star Airline of the Year’ to the airline again."

As one of China’s four largest airlines, Hainan Airlines has been operating in accordance with the requirements of the modern enterprise system since its inception, making innovations in and attempts on the concept of service and the model of operation and management. The airline has been running safely for 19 years during which it has maintained a good record of safety performance, while its service quality has been recognized by a number of passengers and the civil aviation industry.

It is noteworthy that Hainan Airlines released its service idea — the essence of the Five-Star Airline — for the first time at this year’s grand awards ceremony. The idea embraces a service vision of "Hainan Airlines, Changing Expectation" and core "SMILE" service standards, including Safety & Punctuality, Manners & Elegance, Innovation & Passion, Leadership & Teamwork and Equality & Love.

SOURCE: virtualpressoffice.com
Editorial Message
This site contains materials from other clearly stated media sources for the purpose of discussion stimulation and content enrichment among our members only.
whatsonsanya.com does not necessarily endorse their views or the accuracy of their content. For copyright infringement issues please contact editor@whatsonsanya.com