Exhibitor and sponsorship slots for Hainan Rendez-Vous 2012 sold out 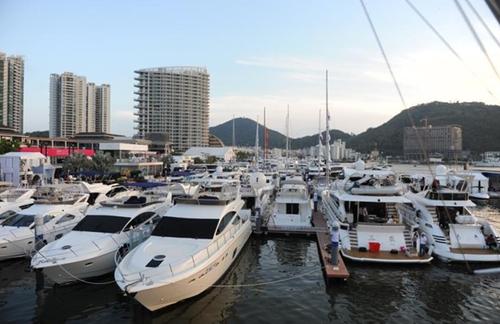 With three months left till the yearly Hainan Rendez-Vous again mesmerises China's millionaires with superyachts, private jets and every other category of ultra-lifestyle luxuries, the organisers announced today that exhibitor and sponsorship slots for the pioneering event have entirely sold out.

Last April's Hainan Rendez-Vous drew some 15,000 elite visitors from across greater China, as well as a who's who of the international yacht and private jet industries and throngs of reporters from overseas and domestic media.

Indications are that an even greater spectacle and fanfare will surround the 2012 edition, for which organisers are using a special purpose barge to extend the show out over the water, adding over 1,000 more square metres of exhibition area.

Over 130 yachts are expected to moor in Sanya harbour for the event, a good number of them sailing all the way from Europe. The fleet will include at least five 50metre plus yachts in the Marina.

More than 300 VVIP guests will be zoomed to and from the show aboard private jets, and the presence of 21 of the world's most advanced private aircraft have been confirmed for the show's static display at Sanya Phoenix International Airport.

Organisers say that the overall exclusivity of Hainan Rendez-Vous will be raised to a whole new level at the 2012 edition, with more private VIP parties and rare brands that are the ultra-lifestyle world’s absolute crème de la crème.

A new and exciting highlight for the 2012 show will be "Design for Mobility", an exhibit curated by the founders of Born Designers, the famous yearly gathering of avant-garde creatives in Courchevel, France. The exhibit will bring several internationally acclaimed designers to Sanya, along with the latest design concepts for land, sea and air travel.

Also making a visual splash will be the show’s fine art showcase, once again curated by famous Paris and Shanghai gallery owner Magda Danysz. More details on participating artists and their works will be revealed soon.

Further activities and attractions under planning include an art forum, a wealth seminar, special VIP and VVIP lounges, gala dinners and after parties, and other surprises. Stay tuned for further details that are sure to be exciting, because when China’s elite come together anything can happen, and Hainan Rendez-Vous 2012 is where the party takes place.

SOURCE: www.eturbonews.com
Editorial Message
This site contains materials from other clearly stated media sources for the purpose of discussion stimulation and content enrichment among our members only.

Next news: Sanya ranks 2nd on list of China’s best tourist destinations in 2011