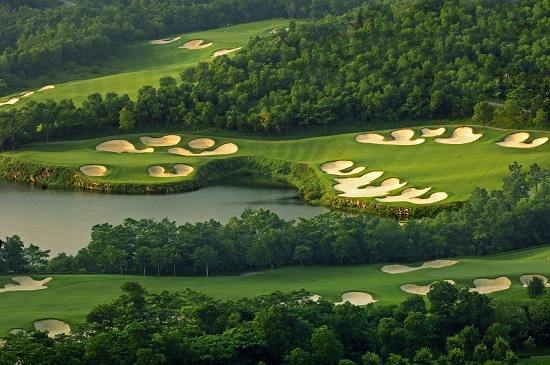 It will be played on Mission Hills Hainan's Vintage Course, March 2-4, 2012 and hosted by the China Golf Association (CGA) and Department of Culture of Radio, Television, Publication and Sports of Hainan Province. With the inaugural World Ladies Championship, Mission Hills Group will have staged a 'grand slam' of major events in all competition formats.

The World Ladies Championship, co-sanctioned by Ladies European Tour and China LPGA Tour, will adopt a unique three-in-one format, featuring 54-hole individual play, professional team play and individual amateur play. In accordance with the Women's World Golf Rankings, two players from each of 18 countries or regions will be invited to participate in the team portion. Results will be calculated by aggregating the total points scored by each golfer. In competing against the best players in the world, the host nation China will field two teams.

Mr. Tenniel Chu, Vice Chairman of Mission Hills Golf Club said, "The stage has long been set for a brand new world women's golf championship in the professional game and we are very glad to see it finally happen. We are very thankful to the CGA, LET, China LPGA Tour and all the other parties for their collaborative input and contributions to this new event. The World Ladies Championship is the only three-in-one game in world golf today.

"Mission Hills has always been devoted to popularizing and promoting the sport through competitions. Golf is once again approved as an Olympic event and we proactively cooperate with different industry bodies to support the development of professional women's golf and achieve breakthroughs in the women's game," added Chu.

Commenting on the new competition, Mr. Zhang Xiaoning, Vice Chairman & Secretary General of China Golf Association said, "For a long period of time, Mission Hills has made significant contributions to organizing world-class tournaments and creating international, competitive platforms for Chinese golfers. We are delighted to see the first World Ladies Championship and Mission Hills host another international event for our players. This time the stage will be larger, involving more local challengers. I believe it will definitely bring in a new era for the women's golf industry in our motherland.

As Zhang pointed out, "the developmental strategy of the CGA is to set our sights on the Olympics, to further develop the professional game in China and to attain break-through in women's golf development." The formation of World Ladies Championship is entirely consistent with that strategy and provides a solid foundation for the realization of those goals.

"Being the first China LPGA Tour stop in 2012, the World Ladies Championship is sure to take a leading role on the tour. Strict entry requirements are imposed so as to ensure high quality of play. Since the sport itself is highly marketed, professional tournaments can foster the growth of developing players. The World Ladies Championship boosts the confidence of players in our nation and encourages more female golfers to strengthen their determination in pursuing their career," revealed Ms. Li Hon, General Manager of China LPGA Tour.

Mr. Fan Xiao Jun, Director-General, Department of Culture Radio, Television, Publication and Sports of Hainan Province said," Through various international sports events staged in Hainan, the Culture and Sports industry plays an important role for the Hainan International Tourism Island development strategy. The World Ladies Championship is another important tournament staged in Haikou and it will definitely enhance the awareness of Hainan province in the World."

"The World Ladies Championship 2012 is an integral part of LET as well as an unprecedented women's professional golf competition in China. As Mission Hills has already arranged numerous international tournaments with success, I believe the upcoming Championship will certainly draw more attention to women's golf and thus further popularize the sport on a global level," said Alexandra Armas, Executive Director of Ladies European Tour.
Designed by Brian Curley, the host Vintage Course pays homage to the classic American golf courses built at the turn of the 20th century. It has a distinct, authentic feel – holes were routed to leave the densely forested site as undisturbed as possible. Abrupt mounding; deep pot bunkers; severe ridges; blind shots; varied, sometimes geometric, bunkering; an array of green sizes and wicker basket pins are highlights.

The Golf & Tourism Forum, the annual major event in the industry, will take place concurrently with the Championship in March 2012. Already in its third year, the Forum has emerged as a "must attend" convention for politicians, businessmen and the golf industry leaders.

Mission Hills, recognized as the leading golf brand in the world and synonymous with high-end, luxurious residences of rare and exquisite design, has created two world-class leisure and wellness resorts. It has held more than 100 international tournaments, including the 1995 World Cup of Golf and the Tiger Woods China Challenge in 2001. In 2007, Mission Hills began its role as host of an unprecedented 12 editions of the Omega Mission Hills World Cup.

Getting There: Mission Hills Hainan is 15 minutes from Haikou Meilan International Airport (HAK). Flights from major cities throughout Asia — including Beijing, Guangzhou, Hong Kong, Shanghai and Singapore — to Haikou are available.

About the Ladies European Tour
The Ladies European Tour (LET) is Europe's leading women's professional golf tour and formed as the WPGA in 1978, before taking its current title in 2000. Over the last 32 years, the tour has developed into a truly international organisation. In 2012, the schedule features 24 tournaments in 19 different countries, with more than 300 members who represent over 30 different nationalities. For further information please go to www.ladieseuropeantour.com.

Since its establishment in December 2008, the China LPGA Tour has developed quickly. In 2009, six tournaments were held, followed by eight events in 2010 and over ten events in 2011. Laying the foundation for Chinese women to go out in the golf world and prepare for the 2016 Olympic Games, the aim of the China LPGA Tour is to organize more than 20 events each year before 2016 and make Chinese women's golf become recognized around the world in the near future.

SOURCE: worldgolf.com
Editorial Message
This site contains materials from other clearly stated media sources for the purpose of discussion stimulation and content enrichment among our members only.

Next news: Sanya ranks 2nd on list of China’s best tourist destinations in 2011