Highlights in Day 3 of Hainan Classic in Riyue Bay, Wanning 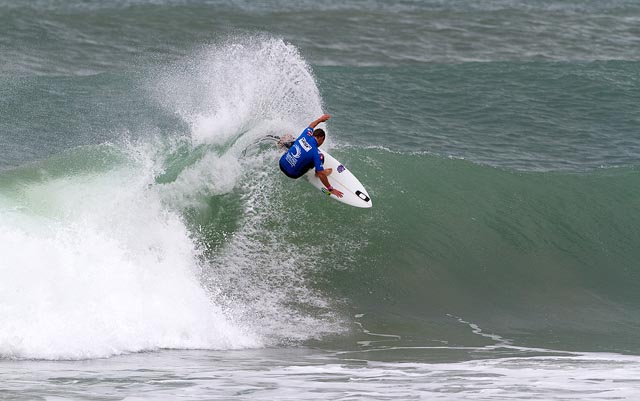 Royden Bryson. Photo: Watts/ISA
At first light, the forecasts presented by Surfline proved on point, as 4- to 6-foot sets rolled through Riyue Bay for Day 3 of the Hainan Classic, a 4-Star ASP event organized by the ISA. What transpired were eight tightly contested heats, filled with late-heat game-changing scores and shuffling of positions, which kept the day’s action exciting and unpredictable.

While conditions weren’t quite as clean or consistent as what was on hand yesterday, there remained long head-high walls of water ideal for the full repertoire of maneuvers from the international pros. “We’ve got a good wave at home called Box Head, it’s a long left, Mundaka-style, and I surf that whenever it breaks,” said Glenn Hall, who’s the lone Irish surfer in the draw and advanced through to the semifinals. “It’s a long left where you do a 150 turns; it gets you half-suited for this wave.”

Everyone remaining in the competition has proven a standout and shown a proficiency for the wave at Riyue Bay, but Hall has been one of the surfers sitting deepest and seemingly advancing somewhat unnoticed. As the big names fall around him – Peru’s Cristobal de Col, USA’s Chris Ward, and Australians Nic Muscroft and Heath Joske were all eliminated on Day 3 – Hall has been consistently posting huge scores and appearing at ease and surprisingly in-tune with whatever the wave offers.

Dion Atkinson was the first Australian eliminated from contention in the ISA China Cup, the first of the two events in the Festival, but he’s the last surfer waving the colors of his country in the Hainan Classic. “I guess it’s sort of a good and bad thing, luckily Australia went good (Team Australia won the team gold medal in the ISA China Cup) without me going too well in the ISA, but I’m stoked to be getting through heats; to be going good in this 4-Star is a great feeling,” said Atkinson, who’s also happy to be on to man-on-man format. “It’s so much better, you sit right where you want to sit, and you know when that next lump appears on the horizon that you’re going to be on it, whichever one you want. It’s such a luxury, hopefully I can keep being smart, picking the right waves and getting through heats.”

South Africa’s Royden Bryson has probably put in more water time than any other surfer competing in the ISA’s two-event Festival. His South African teammates have come to calling a left-hand barrel in front of their hotel “Roydens,” since he was the first to discover it.

“We’ve just had insane waves; I haven’t surfed this much since I was a kid, I reckon,” said Bryson, a point that explains his comfort in the conditions. “I’ve just been spending hours and hours in the water every day and there are so many waves to surf. I’ve had an amazing time.” That experience translated to two heat wins on Day 3 and a spot in the semifinals.

In the fourth quarterfinal, the final heat of the day, the two remaining Frenchmen were forced to fight for survival. Both Joan Duru and Marc Lacomare have proven themselves potential favorites – Lacomare for his 10, Duru for beating his teammate despite the 10 – but one had to go home.

The pair went wave-for-wave most of the heat, with both surfers botching a few rides along the way. Lacomare stamped the lead with one of his signature, multi-maneuver rides for an 8.5. “Before the heat we were just saying this is how it is; I wish we were in a different heat draw,” said Lacomare, following his win. “Somehow I’m always with my friends in the heat, so I guess I have to get used to it now.”

Competition resumes in the morning with the first heat of the semifinals, with Dion Atkinson surfing against Glenn Hall, followed by Royden Bryson versus Marc Lacomare. The finals will follow, to complete competition. The event will wrap-up with the Awards Ceremony followed in the evening by a Farewell Dinner hosted by Hainan Province and the City of Wanning.

www.hainaninternationalsurfingfestival.com/hainan-classic/live.
SOURCE: surf.transworld.net
Editorial Message
News translation appearing here is the property of www.whatsonsanya.com, however, for those who wish to copy the contents in part or in full, please make reference and link the article copied to our site. Whatsonsanya.com does not necessarily endorse their views or the accuracy of their content. For copyright infringement issues please contact editor@whatsonsanya.com