Highlights in Day 1 of Hainan Classic in Riyue Bay, Wanning 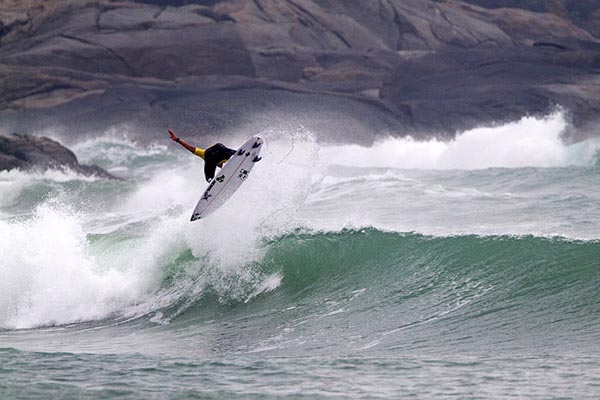 Japan’s Arashi Kato surfing the round of 64 in the Hainan Classic at Riyue Bay, China. Photo: ISA/Watts
No one thought there would be waves in China. That is not the case, as surfers discovered during the ISA China Cup that concluded yesterday after three days of perfect surf.

Day 1 of the inaugural Hainan Classic, an Association of Surfing Professionals (ASP) 4-Star event produced by the ISA as the second event in its Hainan Wanning Riyue Bay International Surfing Festival Presented by Quiksilver, has been a clear testament to the fact that any preconceptions about what the country couldn’t or wouldn’t offer as far as waves were entirely incorrect.

At first call, the sets were being estimated in the three- to five-foot range, but with the swell still filling in, the final heats saw waves with solid six-foot faces. As Dane Jordan, the general manager of ASP Australasia, put it: “It’s safe to say it’s pumping out there.”

Nic Muscroft (AUS) qualified into the finals of the ISA China Cup, so he’s had plenty of heats to get acclimated to the long, lefthand pointbreak wave at Riyue Bay. “I got a bit of confidence after getting through so many heats in a row [in the ISA China Cup]; I’ve never surfed so many heats in my life, so I’ve just got to keep the ball rolling,” said Muscroft, after winning his Round of 64 heat with one of highest combined scores of the day (16.50). “It’s bigger so it’s got some good sections, but it’s breaking a little wide of the bank on some of them so it’s a little bit fatter, but if you get the right one it will just keeping going.”

Experience certainly played a role on Day 1, with the three top scores going to surfers who competed in the first event of the Surfing Festival. Messias Felix (BRA) and Marc Lacomare (FRA) have both had more than a week to familiarize themselves with the different sections of the wave, and both put that knowledge to use, being among the few surfers to effectively execute aerials.

"It’s bigger so I get to try different maneuvers; it’s hard for me to get speed in smaller waves, so I was stoked to have that wave and land that one,” Lacomare said of his 9.00 ride which was punctuated by an air-reverse. “I was more focused on the ISA event for the team than the 4-Star, but stoked to have two contests back-to-back and especially in China. Hopefully they (the ISA) are going to do it again next year with a couple more stars or something.”

If Fernando Aguerre, the ISA president and visionary for the surf festival, has his way, the two-event festival will be something that grows. It was his concept to bring surfing to China and create a multi-dimensional event. “Using an analogy with tennis, this is like putting together a stop of the Davis Cup with an ATP tournament; it’s something that didn’t happen before, and I’m happy that the ASP agreed with the vision. The surfers love it,” he said. “The idea to come and compete for your country and a couple of days later you’re competing for ASP points and money, is a win-win.”

Aside from the high-level of surfing on display, one of the highlight storylines of Day 1 was the presence of Yu Miao in Heat 6. Known as “Jack,” Miao was the first Chinese male to enter and compete in an ASP event. “I came to this island two years ago and there was nobody, just me and a couple other friends, and at most 3 or 4 people in the water, and now I see so many people; it’s getting so popular, it’s exciting to be involved and see surfing start to grow in China,” he said, following his Round of 64 heat. “Now my secret spot is no longer secret.”

Following completion of the action tomorrow afternoon, the complete video footage of the day’s events will be replayed at hainaninternationalsurfingfestival.com/hainan-classic/live.
SOURCE: urf.transworld.net
Editorial Message
News translation appearing here is the property of www.whatsonsanya.com, however, for those who wish to copy the contents in part or in full, please make reference and link the article copied to our site. Whatsonsanya.com does not necessarily endorse their views or the accuracy of their content. For copyright infringement issues please contact editor@whatsonsanya.com