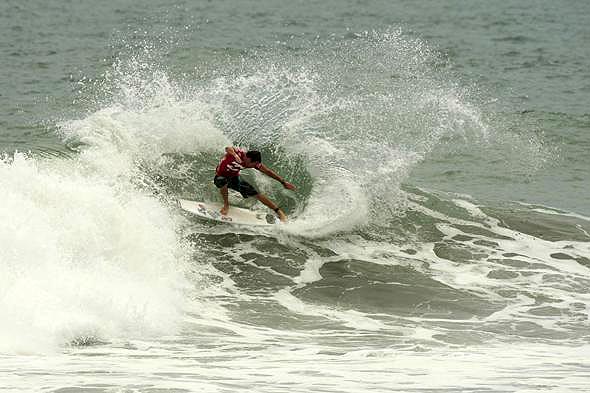 USA’s Cory Lopez will compete in the first ever ISA China Cup January 7 to 14 on Hainan Island, China. Photo: ISA/Watts
The sport of surfing will have an exciting beginning to the 2012 contest calendar, with the ISA China Cup and the Hainan Classic taking place at Hainan Island in China as part of the Hainan Wanning Riyue Bay International Surfing Festival Presented by Quiksilver.

The two-event Festival will begin on January 7 with the ISA China Cup and conclude on January 14 with the final day of competition for the Hainan Classic, an ASP Men’s 4-Star. This is an unprecedented happening in China, a country of 1.4 billion people and 9,000-plus miles of coastline with very little surf culture to speak of. The hope is that the Festival may serve as the initial spark in cultivating a rich surfing presence. The Festival is the work of the ISA and Womei Media, a Beijing sports and media organization that is exclusively representing the ISA’s commercial interests in China.

"This will be a unique and different start to the year: a series of ground-breaking events that are happening because of the joint efforts of the ISA and Womei Media,” said ISA President Fernando Aguerre, who initiated the idea for the ISA China Cup. “I can’t wait for the horn to blow for the first heat.”

The four-day ISA China Cup will feature the finest surfers from the top eight qualifying countries, based on the results of the 2011 ISA World Surfing Games. National Team surfers will include former World Tour competitors Chris Ward and Cory Lopez for the USA, Sofia Mulanovich for Peru, and Dion Atkinson from Australia, and others. Each country will field a National Team of 4 men and 2 women vying for team and individual gold medals.

Immediately following completion of the event, the Hainan Classic, an ASP Men’s 4-Star with a $ 95,000 USD prize-purse, will commence. Much like the ISA China Cup, the contest will draw surfers from all over the globe, but instead of competing for their country, surfers will be vying for individual ASP World Ranking points. Aside from many of the top male competitors from the ISA China Cup, other surfers confirmed to be attending include former ASP World Tour competitor Nathaniel Curran (USA), Mitch Crews, an up-and-coming talent from Australia, and Yujiro Tsuji, one of the top prospects in Japan.

The Festival opens on January 7 with the traditional ISA Opening Ceremony, the Parade of the Nations and the Sands of the World Ceremony, which will be held at the Le Meridian Hotel in the city of Wanning, Hainan Island, China.

Registration for the Hainan Classic is open now on www.aspaustralasia.com.

The event will be webcasted live on www.hainaninternationalsurfingfestival.com beginning January 7 and until the final day, January 14.

SOURCE: surf.transworld.net
Editorial Message
This site contains materials from other clearly stated media sources for the purpose of discussion stimulation and content enrichment among our members only.
whatsonsanya.com does not necessarily endorse their views or the accuracy of their content. For copyright infringement issues please contact editor@whatsonsanya.com