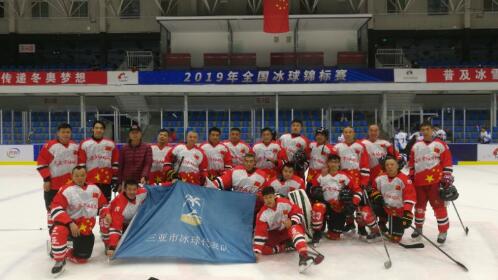 Sanya now has its own ice hockey team and it’s striking out to gain recognition on the national stage.

On June 8th, 2019, the Sanya ice hockey team made its debut at the 2019 China National Ice Hockey Championship at the Aozhong Sports Center in Beijing. The team received support from the Sanya Tourism, Culture, Radio, Television and Sports Bureau.

It was an exciting milestone for the development of winter sports in the tropical resort city, as this was the first time Sanya has participated as a team in the national championship. The Sanya team started well with an impressive win of 12:2 goal difference over Beijing Haidian team on the day.

Talking about the development of the Sanya’s ice hockey team, Lv Shengjun, Executive Director of the Sanya Ice Hockey Association said, “Our team not only consists of players from cities in northern China, such as Qiqihar and Beijing, but three of them are Sanya local players. The oldest player is 65 years old, and the youngest is 15. It is exciting that a tropical Chinese city has its own ice hockey team.”

The rise of ice hockey in China has underlined the surging popularity of winter sports as a whole, driven by the country’s commitment to involve three million people in winter sports activities in the lead-up to the 2022 Winter Olympics in Beijing.