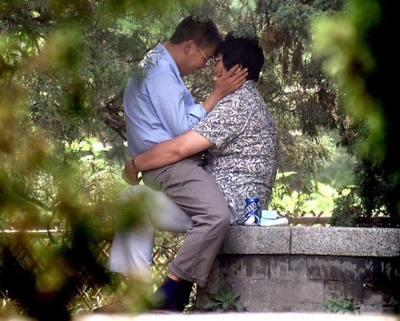 File photo shows a man sitting on his sweetheart’s lap as they enjoy a somewhat private moment under the cover of trees in a Beijing park in June 1999. Police in China arrested a man 28 years after he was accused of hugging a woman against her will — a serious charge at the time — only to find he had married his "victim", state media said Friday.
A Chinese man who was accused of ”hooliganism” for hugging a woman against her will 28 years ago was finally arrested under the now obsolete charge, but police found the accuser and the accused living a happy married life.

The charge no longer exists under the Chinese law but in the 1980s was a serious offence and a conviction for hooliganism could result in a death sentence.

The man named Chen Zonghao, then in south China’s Hainan province, had hugged a colleague without her consent, following which her parents reported him to the police.

He fled to his hometown in the nearby Guangdong province and was a fugitive all these years.

After a search for nearly three decades, during which even the charge under which he was wanted was nullified, police eventually arrested the man on October 3 driving down 1,100 kilometres in a heavy typhoon, the China Daily reported.

China had in the 1980s toughened measures against "immoral" behaviour, the paper said, but the charge was deleted from the criminal law during a revision in 1997.

"Although the charge doesn”t exist now, the police still had a responsibility to arrest the criminal and close the case," a police officer in Hainan was quoted as saying by the paper.

"But we have to consider the special circumstances, since the victim has married her assailant and said she doesn”t want her husband to go to prison," he said.

The woman, now Chen’s wife, had married him one year after the incident and the two now have two sons and a daughter.

The police officials are now trying explain to the prosecutors the special circumstances of the case, and hoping the lawsuit will be withdrawn.

According to the paper the case was among the successful examples of an ongoing national campaign to clear cold cases.

SOURCE: news.in.msn.com
Editorial Message
This site contains materials from other clearly stated media sources for the purpose of discussion stimulation and content enrichment among our members only.
whatsonsanya.com does not necessarily endorse their views or the accuracy of their content. For copyright infringement issues please contact editor@whatsonsanya.com

Next news: Cold front to bring rainfall to some parts of Hainan on weekend