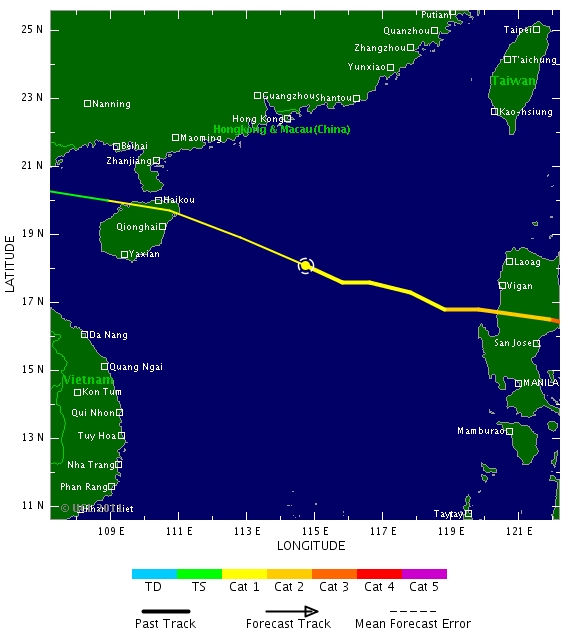 Typhoon Nesat is expected to land on the coastal regions from Wanning of Hainan to Yangjiang of Guangdong from Thursday afternoon or evening
Passenger ferry services linking the southern-most Chinese island province of Hainan with other parts of the country were halted Wednesday at noon as typhoon Nesat neared, according to the maritime bureau in Haikou, the capital city of Hainan.

Nesat, the 17th typhoon this year and likely the strongest to hit Hainan in six years, was 550 km southeast of Wenchang, a city in eastern Hainan, at 4 p.m., according to the provincial meteorological bureau.

It is strengthening while moving northwestward at a speed of about 20 km per hour with wind speed at its center at 40 meters per second, the bureau said in a statement.

The typhoon is expected to land on the coastal regions from Wanning of Hainan to Yangjiang of Guangdong from Thursday afternoon or evening, it added.

The typhoon is also forecast to bring heavy winds and torrential rains to Hainan, Guangdong and Guangxi in the coming days.

The precipitation in some parts of western Guangdong between Sept. 29 and Oct. 2 could exceed 400 mm, said Liu Kun, head of the Guangdong provincial headquarters of flood control and drought relief. The headquarters have ordered all boats to return to ports and to evacuate all residents from disaster-prone regions and cancel all tourism activities on sea waters.

Cai Qinbo, director of the Hainan provincial meteorological bureau, advised all people from returned fishing boats to evacuate and also to brace for flash floods and other disasters in the central mountainous or low-lying areas.