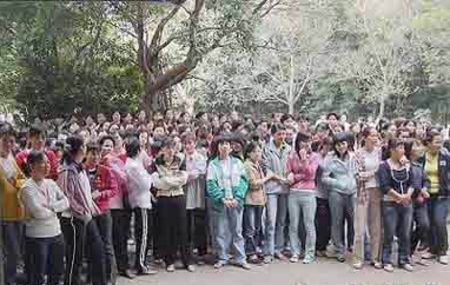 A factory owned by lingerie maker Triumph International AG (TRI) in the southern province of Hainan was hit by a lightning strike last week against the introduction of a new ‘employment incentive’ program and the threatening style adopted by management.

The strike at Hainan Youmei Underwear Company, owned by Triumph, was sparked by a text message sent by the company’s human resources department to more than 800 workers who had voiced complaints over changes in the work schedule. These set efficiency targets that workers must meet in order to earn a bonus of 250 yuan.

Triumph is Europe’s largest maker of women’s lingerie and has an established anti-union record. Triumph managers in Hainan claimed the new targets had been agreed with “labour representatives”, but in China’s case this means stooge unions controlled by management appointees.

Workers told Xinhua that their monthly basic salary was 700 yuan a month, which is too low to live on, and they needed the bonus payments to survive.

Workers said the text message from the company stated that “workers do not need to work on Thursday and Friday, and they should wait for a company notice telling them when to return.” This was widely seen as a threat that they would be fired if they continued to protest.

The workers raised a number of demands during their strike, such as a 250-yuan raise, shift changes, the elimination of the work-efficiency policy, and additional salary and bonus concessions. Workers at the factory staged a strike in 2009, also against attempts to cut bonus payments.

Clearly, these workers have developed a strong sense of solidarity and drawn lessons from their previous struggles about how to organise.

gougou.fqdaili.com
Editorial Message
This site contains materials from other clearly stated media sources for the purpose of discussion stimulation and content enrichment among our members only.
whatsonsanya.com does not necessarily endorse their views or the accuracy of their content. For copyright infringement issues please contact editor@whatsonsanya.com