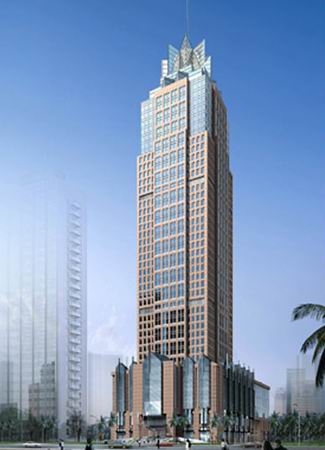 A conceptual building in Haikou

HAIKOU, Aug. 7 (Xinhua) — China would continue its policy of rapid urbanization for "some time yet," as it was crucial for economic restructuring as well as stable and relatively fast economic growth, a government official said Saturday.

Peng Sen, deputy director of the National Development and Reform Commission (NDRC), made the remarks at a conference in Haikou, capital of the southern Hainan Province, adding that 46.6 percent of China’s population lived in urban areas by 2009.

The rate was far below that of the developed nations and also lower than some developing countries with similar development levels to China, Peng said.

Urban population is expected to grow by 10 million annually during the five years to 2015, which was expected to spur over 100 billion yuan (14.77 billion U.S. dollars) of consumption each year, he added.

The Chinese Academy of Social Sciences, a top government think tank, predicted in July that China’s urbanization rate would hit 52 percent in 2015 and grow to 65 percent in 2030.

Peng also said the country should remove the urban-rural dual system which had become an institutional barrier, holding back China from coordinating development between urban areas and rural areas, and narrowing urban-rural gap.

Previous news: Sanya beaches! All gorgeous but where are the Western tourists