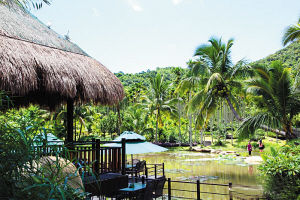 In the first half of this year, Haikou received a total of 3,883,000 domestic and overseas tourists with total tourism revenue reaching 3.83 billion yuan.

Dongzhai Harbor, located in the northeast of Haikou, has attracted more than 10,000 visitors during the first seven months for its renowned reputation as the largest mangrove natural reserve area in China.

Statistics show that the forest coverage in Haikou accounted for 38.38% of the whole land. To create forest tourism into a supplement to leisure and holiday scenic areas, Haikou relevant authorities has now formed a forest tourism system consisting of forest parks, wetland parks, nature reserves and other types of forest scenic areas.

Next news: 2011 rural tourism and culture festival to be held in Wenchang