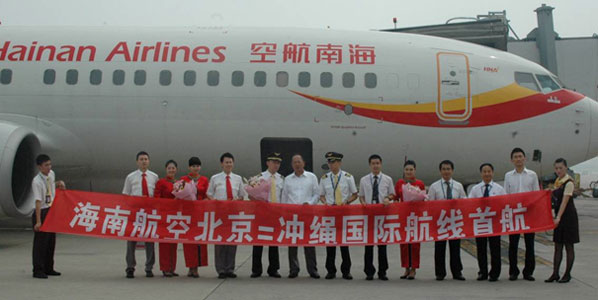 Hainan Airlines celebrated its first route to Japan before departure from Beijing. Okinawa is now served twice-weekly from the Chinese capital.
Hainan Airlines launched two new routes in the last week; one international and a domestic service crossing the country. On 28 July, the airline launched its first route to Japan, beginning to fly twice-weekly – on Thursdays and Sundays – from Beijing (PEK) to Okinawa (OKA) in the group of small islands between Japan’s main islands and Taiwan.
The only other service between Mainland China and Okinawa is with China Eastern from Shanghai Pudong. Domestically, Hainan Airlines on 30 July began flying daily from Hefei (HFE) in Eastern China via Xining (XNN) to Ürümqi (URC) in the northwest.
SOURCE: www.anna.aero
Editorial Message
This site contains materials from other clearly stated media sources for the purpose of discussion stimulation and content enrichment among our members only.
whatsonsanya.com does not necessarily endorse their views or the accuracy of their content. For copyright infringement issues please contact editor@whatsonsanya.com

Next news: 3 vendors arrested for selling fake invoices in Sanya