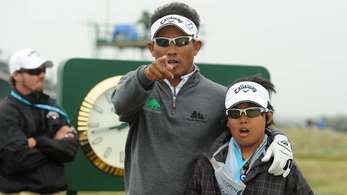 The duo will take on the golfing giants at the Omega Mission Hills World Cup at Mission Hills Resort, Hainan Island, China, from November 24-27.

It has been almost a decade since an Asian country (Japan in 2002) won the World Cup and Lam, together with his established partner Mardan Mamat, reckons that a shift in golfing power could sway in Asia’s favour very soon.

"I’m looking forward to playing in the World Cup with Mardan again. We’ve played in this event on many occasions and there is no reason why an Asian team cannot win the World Cup," said Lam.

Their telepathic understanding was for all to see when they finished atop the leaderboard and earned one of the three coveted places to the World Cup alongside New Zealand and Korea.

The dynamic duo are hoping to better the Lion City’s best finish which was in 1984 when the partnership between Lim Swee Wah and Lim Kian Tiong led Singapore to a tied-10th place.

"Asian players rarely have a chance to play in team competitions and represent our countries and we’re excited to head to Mission Hills," said Lam.

"It’s an honour to play for Singapore and we certainly want to play well to contend for the title. Of course there are many top teams who are going to be favourites but I certainly feel the timing is right for the Asian teams to win the World Cup," added the Singaporean.

Thailand’s Thongchai is also determined to place his country’s honour above everything else as he seeks a win with new partner Kiradech Aphibarnrat at the magnificent Mission Hills Resort.

Regarded as the most successful Asian with a record 13 Asian Tour victories and an unprecedented three Order of Merit crowns, Thongchai would dearly love to add the World Cup to his illustrious career.

"I’ve every confidence that the Asians can compete strongly in the World Cup and perhaps win the tournament this year. Why not? Our players have become stronger and we are getting used to the team format of foursomes and fourball," said Thongchai.

Together with highly-rated Kiradech, a former world junior champion who earned his career breakthrough by winning his first Asian Tour title in India in February,

Thongchai hopes to bring the World Cup home to Thailand for the first time since the team competition was inaugurated in 1953.

"It will be the first time that I will partner Kiradech and it will be great. He’s a really solid player and he’s enjoyed a good season and I’m sure we will play well together," said the Thai legend.

"My form has also come back after some problems with injuries earlier this year. Through the competition on the Asian Tour, our players have become better and hopefully a few of our teams will be on the leaderboard at the World Cup," added Thongchai.

SOURCE: www.espnstar.com
Editorial Message
This site contains materials from other clearly stated media sources for the purpose of discussion stimulation and content enrichment among our members only.
whatsonsanya.com does not necessarily endorse their views or the accuracy of their content. For copyright infringement issues please contact editor@whatsonsanya.com