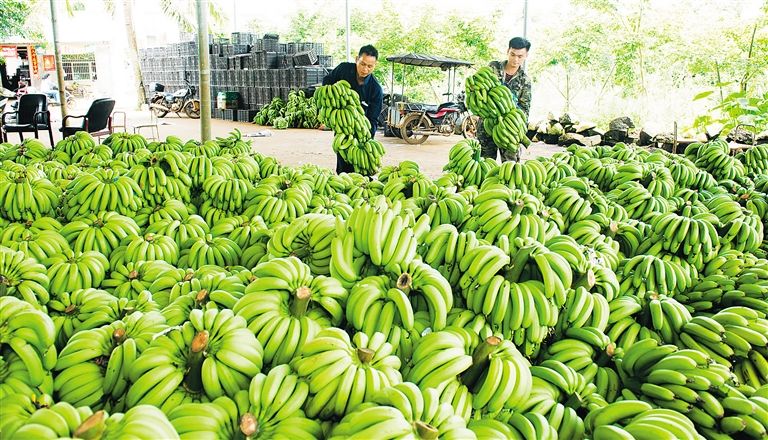 China's netizens have started a new movement, calling on people to buy and eat bananas in a bid to help banana growers who have recently suffered from poor harvests and rumors that their fruit is artificially ripened.

The campaign was launched after a banana grower from China's southern island province Hainan posted an online plea on popular Chinese microblogging site weibo.com, saying "my bananas can't be sold. Who can help me?"

The campaign has generated over 250 million online posts, with netizens providing tips on different ways to eat the fruit and generally expressing support for the province's banana growers.

"The only thing I can do is to eat more bananas. Good luck to the banana growers," posted one netizen.

Wu You, a Chinese street basketball celebrity, also promoted the campaign on his microblog.

"Please eat bananas from Hainan," said his post, which was echoed by hundreds of fans.

Hainan's banana market took a hit earlier this year after rumors circulated that many bananas were ripened with ethephon, an artificial plant growth regulator. The price for bananas dropped from five yuan ($0.77) per kilo last year to less than one yuan per kilo.

Mai Yahong, a farmer from the city of Sanya in Hainan, has over 100,000 kg of bananas that have yet to be sold.

"The price has been lowered to 0.6 yuan per kilo, but there are still no buyers," said Mai.

Agricultural experts have stated that ethephon is a "common and harmless" plant growth regulator, but the bananas continue to stack up on farms and in warehouses.

In Hainan, where more than half of China's bananas are grown, nearly 450,000 metric tons of bananas have yet to be sold, according to the provincial agriculture department.

Meng Xuru, an official with the department, said that poor weather has also had an impact on the region's banana farmers.

"Hainan suffered a bout of cold weather at the beginning of this year, meaning that bananas that were supposed to ripen during the winter were not ready to hit the market until the spring," said Meng.

To help the banana farmers, Sanya's agricultural bureau has established a "banana sales coordination group," calling on government authorities and local enterprises to buy the bananas with the promise of free delivery.

Local resident Li Yunqi bought 10 boxes of bananas for friends and relatives after hearing about the call.

"Farmers worked very hard to grow these bananas, and it's our responsibility to help them under the difficult circumstances," Li said.

Next news: 31 projects/15,811 rooms under construction in Hainan