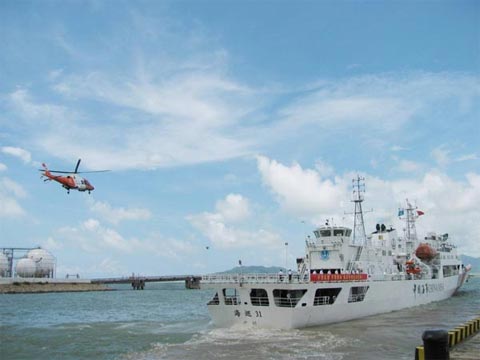 China has competing claims with Taiwan, Vietnam, the Philippines, Malaysia and Brunei over potentially resource-rich areas in the East Sea which have flared in recent weeks.

According to the Global Times, 14 Chinese navy vessels recently staged drills in waters near China’s southern tropical island of Hainan, including anti-submarine manoeuvres and the beach landing of troops.

The exercises in the East Sea were aimed at "defending atolls and protecting sea lanes," reports said.

The China Maritime Surveillance force meanwhile will be bolstered from the current staff of 9,000 to 15,000 personnel by 2020, the China Daily reported.

The force falls under the State Oceanic Administration, an agency that supervises China’s coastline and territorial waters.

China said Thursday it had dispatched a maritime patrol vessel to disputed South China Sea waters but insisted it was committed to peace in the region.

The Philippines also accused China of violating their sovereignty in the East Sea. Manila planed to bring the issue to the United Nations.