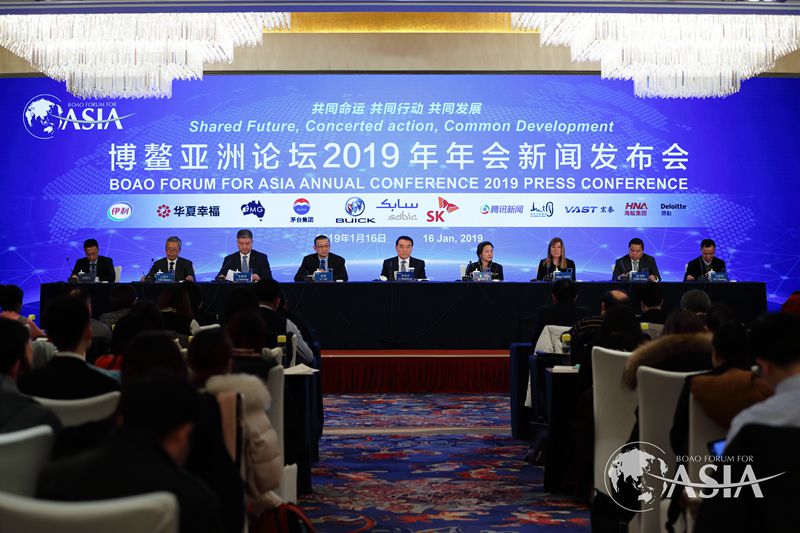 On January 16th, 2019, the Secretariat of the Boao Forum for Asia (BFA) announced at a press conference in Beijing that the Annual Conference 2019 (AC2019) is scheduled from March 26th to 29th, 2019 in Boao, Hainan, China around the theme of "Shared Future, Concerted Action, Common Development." The opening plenum will take place on March 28th, 2019.

According to BFA Secretary General Li Baodong, the theme and topics of the AC2019 cover a wide range of issues of common interest among stakeholders. They were finalized after several rounds of discussion among BFA’s initial countries, BOD members, advisers, members, partners and think tanks.

2018 saw a moderate growth, but with a slower momentum, in the world economy, which was challenged by distinct divergences among major economies in growth and monetary policy, intensifying volatility in international flows of capital, financial and energy markets, the severely impacted multilateral trade mechanism and pressing issues facing global structural reforms. The world is now under mounting downward economic pressure. At the same time, the world is also surrounded by many more unstable factors and uncertainties, such as heightened competition among big powers and intermittently deteriorating hot-button issues. Countries are closely watching the development of uncertainties caused by unilateralism and protectionism to the world economy, holding their expectations in strengthening multilateralism and global governance.

As Chinese President Xi Jinping pointed out at the BFA Annual Conference 2018, humanity has a major choice to make between openness and isolation, and between progress and retrogression. Leaders from various communities are expected to give their answers at the AC2019.

Li said that globalization and free trade are inevitable trends of economic development; that multilateralism, dialogue and cooperation are the shared aspiration of most countries; and that openness and innovation are natural choices to sustain economic progress and globalization. As a widely watched event, the BFA AC2019 will provide an open, inclusive dialogue platform for stakeholders and send a clear message to build consensus regarding global governance.

It is in this global context that the BFA has opted for “Shared Future, Concerted Action, Common Development” as the theme of its AC2019 . A shared future calls for concerted actions, whereas concerted actions lead to common development.

The multilateralism, regional cooperation and global governance module, which focuses on “multilateral cooperation”, is comprised of sessions such as global governance, the Belt and Road initiative, island economy, Asian regional organizations roundtable, ASEAN-China governors/mayors dialogue, CEO dialogues between China and the US, Japan and Australia, multinationals and cross-strait CEO roundtables.

The innovation-driven development module, which emphasizes "technology innovation", addresses issues such as sustainable development, 5G and the Internet of Things, "AI plus", big data, shared economy, blue economy and IT.

The high-quality development module, which accentuates "quality growth", explores issues from rural and urban development to manufacturing, finance, consumption, cross-border investment, housing and securities markets, the relationship between SOEs and the private sector, SMEs and energy.

The critical issues module covers a broad range of fields, including politics, diplomacy, security, education, culture, health and livelihood. It is composed of sessions such as South China Sea, Redefining Health, A Conversation with University Presidents and roundtables for young leaders, women leaders and media leaders.

Li also added that the annual conferences of BFA, which is hosted in China, have been graced by its state leaders every year. Currently, the BFA secretariat is maintaining communication and has received positive feedback with regards to the presence of state leaders from the host country at the 2019 Annual Conference. Also, a number of Asian and European state leaders have stated their intention to participate.

Annual Conference 2019 of the Boao Forum for Asia (BFA)

Next news: 2019 Round Hainan Regatta, a 9-day round-the-island sailing race