Over 10,000 bottles of fake liquor seized, 17 arrested in Hainan 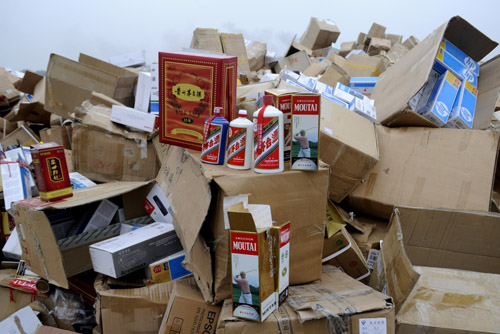 A shadowy fake liquor industry that sees cheap spirits poured into bottles bearing expensive brand labels and chemicals added to cheap wine masquerading as high-end foreign wine has been uncovered during a police investigation in Hainan Province in May.

Hotel waiters are trained to open branded bottles without damaging them and then collect them after use for sale to fake liquor gangs, while greedy restaurant and bar owners display fake liquor prominently in their establishments, the investigation in the provincial capital Haikou found.

More than 10,000 bottles of fake Moutai, Wuliangye, Louis VIII and Hennessy XO were found across 11 fake liquor-making sites and 17 suspects were arrested in the biggest case on the island so far this year.

At one of the sites in a village in Haikou’s Xiuying district, packing cases and boxes were found in a small yard.

A dirty white plastic barrel was filled with brown-colored fake wine. Funnels and spoons and empty wine bottles with famous brand labels attached were scattered across the ground.

"The process of making fake liquors is both easy and quick," said Zhao Jiang, a police officer with Haikou Public Security Bureau.

The rampant circulation of fake liquor has hit sales of real wines and spirits hard and also poses a risk to public health.

Forged anti-counterfeiting marks were stamped onto the bottles, which were then packed up in cases and sold on the market.

The initial stage of the investigation identified one of the main suspects as a man surnamed Xie, who started a liquor store in Haikou in 2010. In order to make bigger profits, he bought materials for making fake liquor in Guangdong Province and the Guangxi Zhuang

Xie also purchased bottles of branded domestic and foreign liquor as well as packaging boxes from hotels in Haikou.

Xie dispatched a relative to Guangxi to learn how to make fake liquor and enrolled more than 10 relatives and acquaintances to help him ply his criminal trade.

An entire industry has formed around the manufacture of fake liquor, including fields of expertise such as making counterfeit trademarks and bottle caps, recycling luxury wine and spirit bottles and selling to hotels and restaurants.

"Low costs and high profits are the main reasons for the repeated cases of fake liquor," said Chen Xiaokun, head of the Haikou police investigating team.

A factory making fake liquor only needs two workers, who can fill 200 bottles every day and produce 6,000 bottles a month, Chen said.

Hotels have become accustomed to collecting luxury liquor bottles left by customers in order to sell them to purchasers.

Hotels also give special training to waiters so that they don’t damage wine bottles or the anti-counterfeiting marks on them when opening them for customers, a waitress in a Haikou hotel surnamed Fu said.

"The more expensive the wine is, the more the bottles are worth," the waitress said, adding that a liquor bottle with an undamaged anti-counterfeiting mark could be sold for 100 yuan whereas bottles with damaged marks fetch 70 to 80 yuan.

Those recycling the bottles only work with certain contacts in the hotel rather than strangers, the waitress added.

Moutai is the bestselling luxury liquor brand and a high-end restaurant can sell nearly 100 bottles a month.

"Everybody knows what these bottles are sold for," a lobby manager in the hotel surnamed Lin said.

To make more money, many restaurants, bars and KTV sites, the major sites for the consumption of spirits and wine, have become complicit in the sale of fake liquor.

A wine store boss surnamed Wu, who was among the suspects arrested, said a bottle of fake Wuliangye could be bought from the makers for 300 yuan and sold to customers at 780 yuan. Extra packaging could fetch another 150 yuan, giving a net profit of up to 630 yuan.

In most fake liquor cases it’s very hard for customers to judge the authenticity of products, Chen said.

"According to the Criminal Law, it is only when the sales volume reaches 50,000 yuan ($7,700) that the makers can be sent to judicial departments. But in reality, the makers seldom keep accounts, which makes it difficult for us to get evidence about their sales," Tan said.

Fake products are usually produced in one area and sold in another, so law enforcement bodies in different regions should cooperate in order to cut supply lines, said Ding Xinzheng, a law professor with the Chongqing Academy of Social Sciences.

Global Times
Editorial Message
This site contains materials from other clearly stated media sources for the purpose of discussion stimulation and content enrichment among our members only.
whatsonsanya.com does not necessarily endorse their views or the accuracy of their content. For copyright infringement issues please contact editor@whatsonsanya.com

Next news: Sanya port confirmed to be Asian stopover for Ocean Race 2011-2012