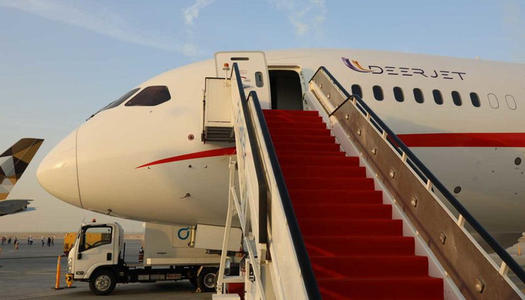 Beijing-based Deer Jet has purchased an Airbus Corporate Jetliner (ACJ), one of the world's top business jets, for its charter flights service.
Deer Jet will be the first Chinese business jet operator to use an ACJ, Zhang Peng, the company's vice president told a press on Wednesday.
"It's an important move to cope with the growing competition in the national business jet market," said Zhang.
There are about 70 business jets operated by six companies in China.
Founded in 1995, the Deer Jet Co,. Ltd., is a subsidiary of Hainan Airlines, China's fourth largest airline group. It currently runs 39 business jets on more than 120 routes.
The company aims to increase its number of business jets to 55 by the end of 2011, said Zhang.
The new ACJ will be based in Beijing, from where it will offer nonstop charter flights to destinations in China and most of the Asia-Pacific. The Airbus ACJ's intercontinental range also means it can be used for one-stop flights to most cities worldwide, he said.
The aircraft, which arrived in Beijing on May 4, is worth at least 60 million U.S. dollars and has 28 passenger seats.
Airbus has sold more than 20 business jets to China since its first sale in 2005, and it plans to sell five new ACJs in the greater China area each year over the next five years.
"China holds 25 percent of ACJ's total world sales, and the share will keep growing in the future," said David Velupillai, Airbus' Marketing Director for Executive and Private Aviation Department.
To boost sales in the Chinese market, the company has adjusted the cabin design of its jets sold to China.
The jets cater to the color and furniture preferences of Asian customers. Airbus also specially created the red wine-colored interior for the Chinese market, said Velupillai.
"We expect China will need 500 to 600 business jets in total by 2015 with an average eight percent GDP growth," said Zhang Peng.
"It might take over the United States to lead the global business jet market within 10 years," he said.
SOURCE: Xinhua
Editorial Message
This site contains materials from other clearly stated media sources for the purpose of discussion stimulation and content enrichment among our members only.