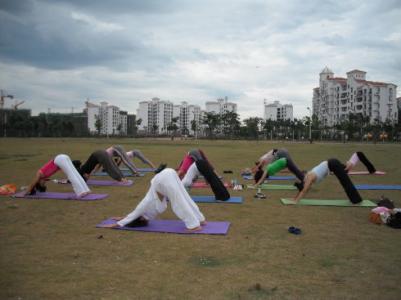 Sherri Rao, the establishment of Fine Yoga began when she tried to shed some pounds, gained from her pregnancy, through yoga. Later, she snapped up the yoga studio when the business was put up for sale, knowing fully well that such an exercise regime will increase in popularity among urban Chinese.
Five years later, in 2011, with two branches in Shunyi, north Beijing, and Dawanglu in downtown Beijing, Fine Yoga has evolved to become a training center for potential yoga teachers, aside from its regular yoga classes for the general public.
Fine Yoga has so far produced 2,000 Chinese graduates who are qualified to be yoga teachers. Future plans include online yoga classes and the establishment of a yoga retreat center in Hainan, South China.
Ninety percent of students join through word of mouth.
Initially driven by ambition and courage to start a yoga business, these days Rao's business philosophy is to impart physical and spiritual health.
"It's a challenge to teach spirituality. I feel sorry for those who worship money," she said.
"At the beginning, the majority of my students came here to lose weight but later, during practice, they became mindful of the surroundings and actions in their daily lives."
Her knowledge and skills are influenced from insights gained from her trips to the ashrams in Mysore, India, and practitioners from the West.
SOURCE: chinadaily.com.cn
Editorial Message
This site contains materials from other clearly stated media sources for the purpose of discussion stimulation and content enrichment among our members only.

Next news: Tourism-related land use accounts for 40% of total land supply in Sanya