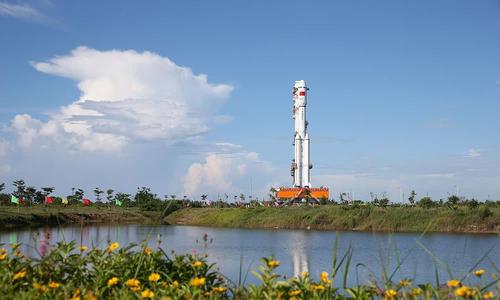 The rocket was sent into space at 7 a.m. from a launch site in Hainan, said a statement from the Center for Space Science and Applied Research of the Chinese Academy of Sciences (CAS).

"The successful launch test will play an important role in the country's research on the independent monitoring of the space environment and safeguarding the security of space activities," it said.

The rocket is the first of its kind for the "Meridian Project," which is a ground-based network program to monitor the solar-terrestrial space environment and has been supported by the Chinese government.

The project consists of a chain of ground-based observatories with multiple instruments, including magnetometers and various radar. The chain is mainly located in the neighborhood of 120 degrees East Longitude and 30 degrees North Latitude.

The statement said the project would enhance the country's innovative capabilities in space technology.

Saturday's launch used the Tianying-3C rocket, provided by the Academy of Aerospace Solid Propulsion Technology under the China Aerospace Science and Technology Corporation. Other systems were developed by the CAS.

Scientists are currently analyzing data received from the rocket.