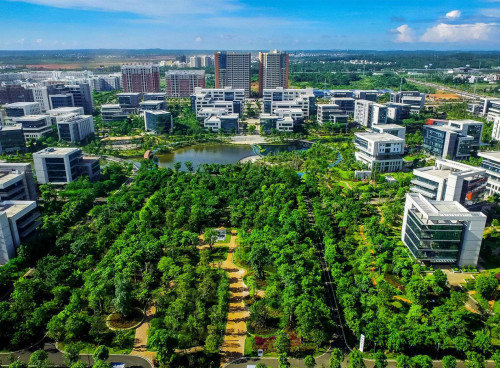 Construction continues at the Hainan Ecological Software Park alongside developments in medical information to make a healthy tourism service platform.

The Hainan Ecological Software Park is located in the Laocheng Industrial Park of Chengmai and will cover an area of 2 million square metres by the end of its construction.

The general construction area has already exceeded 200,000 square metres with a total of 155 enterprises establishing bases in the Park, including Neusoft, ChinaSoft, Microsoft Technology Centre, the Great Wall Information Industry Company and Hewlett-Packard.

The decision to create the Hainan Ecological Software Park stemmed from a strategic cooperation agreement that was signed by the Hainan Provincial Government and the China Electronics Corporation in June 2007.

The project is an important part of Hainan Island's industrial development strategy during its 12th Five-Year Plan period, and is a key element in the development of the information industry in Hainan.

The Software Park is a huge step in the Hainan province's economy, with an output value of nearly 1.4 billion in 2010 that is expected to exceed 10 billion Yuan by the end of the period.

A medical information software project was signed last year with Chinese IT solutions and services provider, Neusoft, and the Hainan provincial government and health department.

Neusoft pledged to invest 600 million Yuan to the construction of the Hainan Ecological Software Park and will use the Park as a base to focus on software research, technology development, outsourcing, medical electronics and medical health and information talent training.

Along with two other departments, Neusoft will cooperate with Hainan’s public health system to integrate regional medical recourses and organise medical information to develop a healthy tourism service platform for both domestic and international tourists as well as Hainanese residents.

The Chinese government has invested billions of dollars into its only tropical island paradise that has been dubbed ‘the Hawaii of the Far East' in an effort to boost its reputation as a top international tourism destination.

The agreement with Neusoft and the development of the park are big steps for Hainan as it prepares for the expected sharp increase in international tourist numbers in the next few years.