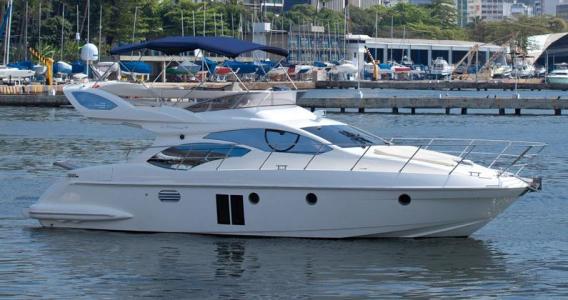 Caprice Lam took 90 minutes to close his first luxury-yacht sale, from the time the customer stepped aboard the 19-meter vessel on China's Hainan Island to the moment the bank wired the 35 percent deposit.
"I don't even have his name card," said Lam, hours after the deal, worth 13 million yuan ($2 million), on April 2 at a boat show in the tropical resort of Sanya. "He just gave me his cell phone number, called his bank and paid the deposit."
The sale shows how China's industrial base is breaking into the most expensive luxury markets. While wealthy Chinese typically entered markets for jewelry, clothes, cars and planes through the United States and European brands, Lam works for Xiamen Hangsheng Yacht Building Co Ltd in Fujian province.
It's one of at least half-a-dozen Chinese yacht builders competing in the country's nascent nautical market with Azimut Yachts SpA, Ferretti Yachts SpA, Princess Yachts International Plc, and Brunswick Corp.
"This is a sign of China's own industrial confidence," said Ryan Swift, Hong Kong-based editor-in-chief of Asia-Pacific Boating magazine.

"A yacht is a very complex product requiring all the engineering of a house, which has to float, survive waves and have fine finishing on the inside."
Spiral staircase
This time, Chinese companies are entering a luxury market early.
While China now has as many as 400 dollar billionaires, there are only about 100 Chinese-owned yachts longer than 60 feet, according to Rupert Hoogewerf, who compiles the Hurun Report of wealthy Chinese. In the US there were more than 7,000 yachts of that size in 2006.
In Zhuhai, two hours from Hong Kong by ferry and car, Sunbird Yacht Co Ltd is building two vessels it plans to ship to Italy in July. The buyer, a Milan boatyard, plans to unveil them at the Genoa boat show in October.
Sunbird's boatyard is operating seven days a week to meet the deadline. On a recent afternoon, about 20 laborers were working on the first of the yachts, a 21-meter vessel.
Workers sanded the teak decks by hand and sealed tubes of electrical wires. Carpenters assembled the spiral staircase leading to the bridge from the deck below.
Sunbird's staff of 400 is capable of making about 20 boats per year. Large-yacht building is new to China, and workers lack skills and experience of their Western counterparts, said Filippo Bertoni, a naval architect from Perugia, Italy, who designed the export boats for Sunbird.
"That first boat was like a school boat for them," said Bertoni, who expects the vessel will require 100,000 man hours to make in China, a task that would take an Italian crew 35,000 hours. "For the next boats, they will be faster."
Higher wages
The yacht builders show how Chinese companies are moving into higher-value products as inflation and rising wages pare the country's competitiveness for cheap manufactured goods and assembly plants.
Sunbird pays unskilled workers at least 2,000 yuan a month including overtime, rising to three times that for electricians and carpenters, according to Charles Luo, vice-president of international business.
While that's more than double the average provincial wage, it still allows the company to build boats for about 30 percent less than foreign competitors.
With 43 percent duties on boats imported into China, "we have a huge advantage over foreign brands", Luo said.
European competition
Still, some Chinese buyers are willing to pay a premium for a European yacht. Wang Dafu, chairman of the developer Shenzhen Visun Real Estate Group, bought a 21-meter Pershing made by Ferretti to entertain clients and help add cachet to his marina in Sanya.
"If I don't buy a foreign boat, how can I ask others to?" said Wang, who is also a Ferretti dealer.
"There's a lot of interest in boats bigger than 30 meters," said Robert How, general manager of Princess Yachts Asia.
"China is really, really coming on here."