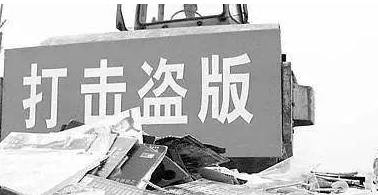 More than 26 million pieces of pirated and illegal publications were destroyed across China on Friday to mark the World Intellectual Property Day on April 26, a sign of the country's determination to protect intellectual property rights (IPR).
Pirated discs and books as well as unauthorized newspapers and periodicals were destroyed on Friday after being confiscated by authorities in all 31 province-level regions on the Chinese mainland.
Authorities will further crack down on piracy and focus on illegal printing houses and disc production lines, said Yan Xiaohong, deputy director of the State Press and Publication Administration and of the National Copyright Administration.
In Yunnan Province, anti-piracy authorities targeted their campaigns to areas nearby schools. Pornographic discs, books and pirated software were confiscated, said Yang Wenhu, head of the provincial Press and Publication Bureau.
Online piracy is a recent development, so Hainan Province targeted its campaign not only toward illegal publications but also to pirated content available online, said Wang Yangjun, deputy secretary general of Hainan provincial government.
The "Green Bookmark Action 2011" kicked off in several provincial-level regions, including Hainan, Liaoning and Tianjin, on Friday under the slogan, "Refuse piracy, start with me." Thousands of people signed up to show their support and, in return, received a green bookmark with the event's logo.
Similar operations in 2009 and 2010 saw the destruction of 46.85 million and 36 million pirated and illegal publications, respectively.
China's courts closed 3,942 criminal cases involving IPR infringements last year, up 7.7 percent from 2009. A total of 6,000 people were found guilty of IPR infringements.
SOURCE: Xinhua
Editorial Message
This site contains materials from other clearly stated media sources for the purpose of discussion stimulation and content enrichment among our members only.
whatsonsanya.com does not necessarily endorse their views or the accuracy of their content. For copyright infringement issues please contact editor@whatsonsanya.com