National Cultural and Natural Heritage Day, celebrated annually on the second Saturday of June, is held as a collective showcase of achievements made in China toward the protection of intangible cultural heritage. 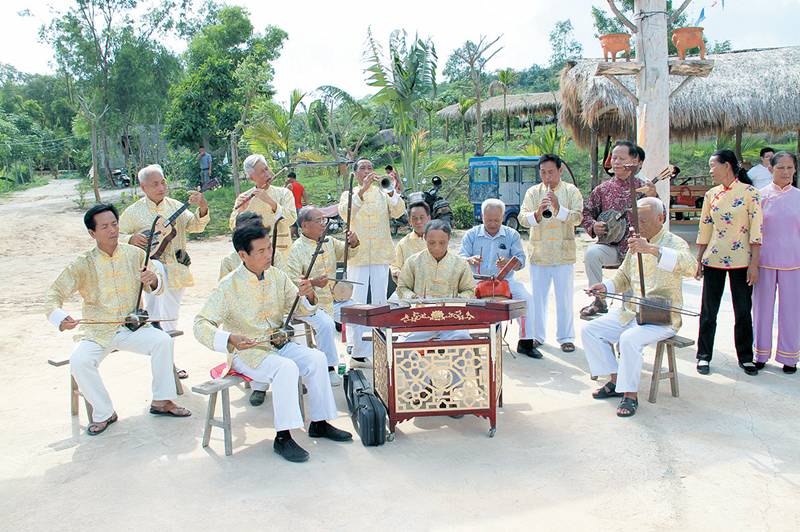 The Yazhou folk song is a unique folk art in Sanya with a long history. It is a kind of Chinese ballad intonated in Hakka dialect in ancient Yazhou areas.

Yazhou folk songs purportedly arose during the Song Dynasty, and bloomed in the late Qing Dynasty. At the very beginning, only scholars sung the songs to express their feelings. Later, the art form spread among common people.

Most of the lyrics consist of seven characters. Lyrical themes include all aspects of social life, including humanity, history, landscape, production, and labor. There are more than one hundred known narrative long poems in the genre. Those songs make up the precious cultural relic known as Yazhou folk songs.

In 2006, the Yazhou folk song was included on the national-level intangible cultural heritage list.

The firewood-gathering dance is the representative folk dance of the Li Minority, called “Zhuancha” and “Taicha” in the Li language.

It originated from the Li funeral custom in ancient Yazhou Prefecture (today’s Sanya City of Hainan Province). It is a dance performed by ancient Li people. It was meant to protect a corpse after someone had died, to drive beasts away, to help someone get over a shock, or to worship ancestors.

On a patch of earth used for sun-drying grain or on a piece of level ground on a hillside, two square pieces of wood as thick as a man’s leg are placed in parallel at a specific interval to serve as supporting structures, and several long bamboo poles as thick as a man’s wrist are laid across them. “Pole holders” knock the poles on the supporting structure or other poles to produce rhythmic sounds called “firewood gathering.” A dancer or dancers jump into the poles, skip back and forth, squat, and imitate human beings’ working scenes or various animals’ actions and noises.

Storytellers play a crucial part in keeping cultures alive. They need to be acquainted with their region’s local ethnic historical culture and languages. The spoken contents of their tales involve the Li people’s living traditions and customs, legends, cultural performances, and more.

Designated by UNESCO as an “intangible cultural heritage item in urgent need of safeguarding,” traditional Li textile techniques are used to make clothes and other daily necessities.

Textiles made by traditional Li textile techniques, such as dragon quilts, “head-through garment,” coverlets, tight skirts, kerchiefs, hats, and wall hangings are all referred to as Li Brocades. Dragon quilts are a comprehensive showcase of such techniques, once regarded as suitable tribute to emperors.

The Xianshui Song is a very old traditional folk song formed by the Dan fishermen in Sanya.

It is sung in the Dan people’s folk dialect, with lively rhythms and pleasing melodies. The Xianshui folk song involves fishing activities and customs. In 2010, The Xianshui Song of the Dan People was included in the Hainan Provincial-level Intangible Cultural Heritage list.

The Panhuang Dance is one of the oldest and most popular types of dance in the history of the Miao Minority in Sanya.

It is commonly perormed in the Miao ethnic gathering place known as Yucai Area in Sanya. The dance is performed to worship ancestors and the creator of the universe and to pray for a prosperous year.

Li Pottery is a real part of the Li people’s daily lives, and a feature of the unique ceremonial items prepared for festivals or to mark important events in their lives.

In Heitu village, more than one hundred female elders are involved in the pottery industry, mainly producing items such as vats, basins, jars, bowls, pots, and so on. Sometimes these pottery products are carved with various patterns, including animals and plants, creating works of art that are both practical and incredibly beautiful.

In ancient times, the Li people used a piece of wood and a wooden rod to make fire. When making fire by this method, the pieces of wood are fixed between the feet and the rod is spun on the surface of the wood to cause enough friction to create sparks. Fibers of dried banana trees and cotton along with other flammable materials are placed around the piece of wood to catch the sparks and start a fire.

To the present day, this ancient fire-making technique is still practiced at the gathering places of some Li tribes in Sanya.