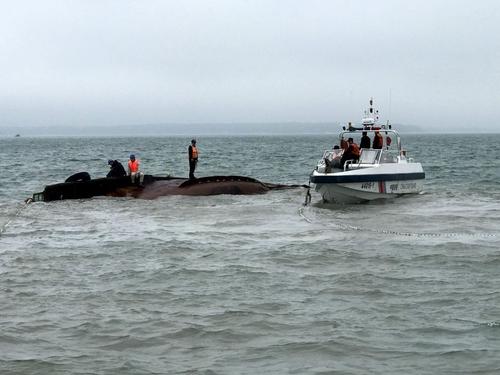 Three fishermen are dead and four others are missing after their boats sank during a sudden thundershower and hailstorm off China's southernmost island province of Hainan early this morning, fishery authorities said.
Altogether, eight fishing boats with 16 people aboard sank after the sudden storm hit coastal waters near the city of Dongfang in western Hainan at around 3 a.m., said Luo Shaohua, director of the city's fishery bureau.
Rescuers have pulled nine people from the sea alive and are still searching for the four missing ones, he said.
So far, no such storm has been reported in other places along the western coast of the island, said Li Nianyou, deputy head of the provincial department of ocean and fishery.
However, in the southern province of Guangdong, at least 18 people have been killed and 155 injured after hailstorms and strong winds rocked the region during the weekend.
SOURCE: news.xinhuanet.com
Editorial Message
This site contains materials from other clearly stated media sources for the purpose of discussion stimulation and content enrichment among our members only.
whatsonsanya.com does not necessarily endorse their views or the accuracy of their content. For copyright infringement issues please contact editor@whatsonsanya.com