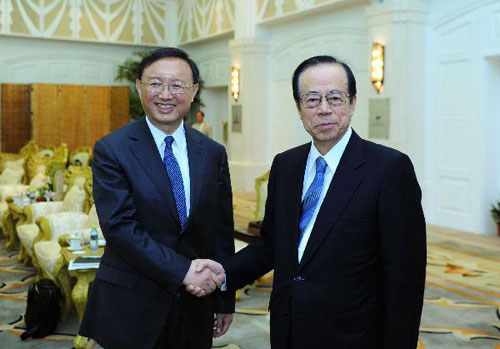 In his meeting with Association of Southeast Asian Nations(ASEAN)Secretary General Surin Pitsuwan Saturday morning, Yang said this year marks an important milestone in China-ASEAN relations as it coincides with the 20th anniversary of the establishment of bilateral dialogue.

Yang proposed both sides make the series of celebration events a success, promote substantive cooperation and carry out the initiatives made by leaders and keep the good momentum of all-round growth of China-ASEAN strategic partnership.

Yang said a majority of ASEAN countries were founding members of the BFA, played an active role in the forum and offered support to the growth of the forum.

As the host country, China supported the cooperation between the BFA and ASEAN nations and would like to facilitate ASEAN nations’ participation in the forum so as to help BFA contribute more to boosting Asian common prosperity, Yang said.

Surin Pitsuwan said ASEAN would take the 20th anniversary of the establishment of bilateral dialogue as an opportunity, deepen and explore mutually-beneficial cooperation.

On Friday, Yang met with Yasuo Fukuda, chairman of BFA board of directors and Japan’s former prime minister, on bilateral relations and issues of common concern.

More than 1,400 personages from around the globe attended the ongoing BFA conference, which marked the 10th anniversary of the inauguration of the BFA, a non-government platform for government officials, business leaders and academics.